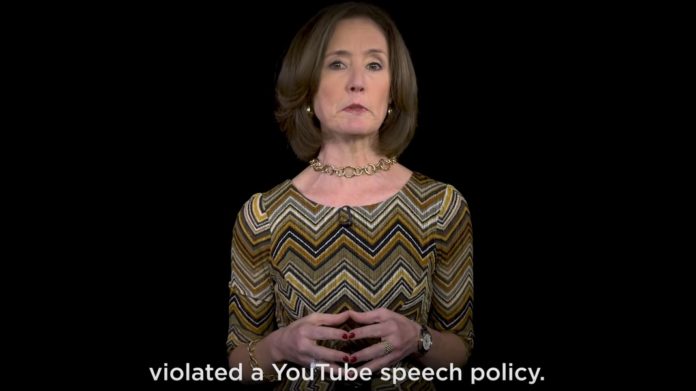 Leftists are increasingly in favor of censoring any view they disagree with.

The fact that free speech rights are still even up for debate in present day America is chilling.

Now, one video from this conservative group was banned on YouTube for a shocking reason.

For decades, Leftists have pretended to be in favor of free speech.

In reality, they only believe their speech should be protected.

In 1965, Herbert Marcuse, a chief member of the Frankfurt school -– a cohort of Marxist intellectuals who led Europe -– wrote an essay in which he advocated for “repressive tolerance,” meaning you don’t have to be tolerant of the intolerant.

This idea has been Leftists’ cover for decades.

Instead of contending with ideas they don’t like, they just deem them intolerable and shut them down.

Sadly, this is more relevant than ever today.

Since Donald Trump’s election, YouTube has been targeting conservative channels.

And now The Daily Signal, a news media arm of the Heritage Foundation, had one of their videos pulled because it was critical of transgenderism.

The Daily Signal, the Heritage Foundation’s investigative reporting, news, and commentary outlet, says that one of their videos, a YouTube testimonial from a pediatrician about gender transition surgery for children, was censored by YouTube for “hate speech.”

According to the Daily Signal’s Kate Trinko, the group’s 2017 video starring Dr. Michelle Cretella, “pediatrician with many years’ experience and the executive director of the American Academy of Pediatricians,” was pulled off YouTube because, in the video, Cretella suggested that, “if you want to cut off a leg or an arm you’re mentally ill, but if you want to cut off healthy breasts or a penis, you’re transgender.”
…
Attempts to contact YouTube proved futile. “Over the past few months, The Daily Signal worked with YouTube to try to reach a resolution. Ultimately, we were told the only way we could get the video back on YouTube was to delete the previously mentioned sentence.”

Thanks to radical Leftism, biological realities are now offensive, and must be pulled from the internet.

This incident is proof of why “hate speech” laws would be a disaster.

There’s no agreed-upon definition of what constitutes hate.

And the Left will use the concept of “repressive tolerance” to label anything that contradicts their narrative as hateful.

Are you concerned about how Leftists are trying to police language?