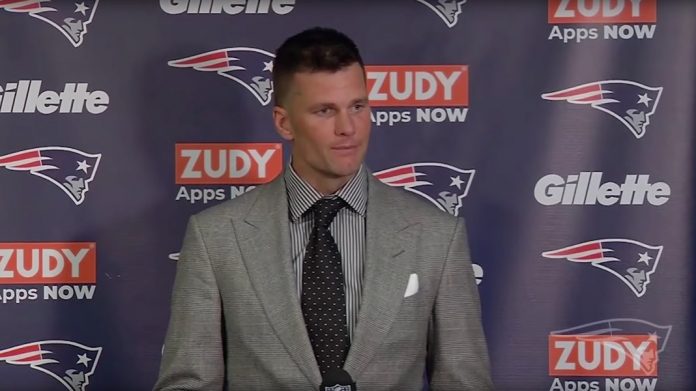 At 43 years young and with a new team, Tom Brady clinched another Super Bowl win.

Much to the dismay of many, he proved once again why he is called the “Greatest of All Time” as he led the Tampa Bay Buccaneers to victory.

But you are not going to believe what the Left is saying now about Tom Brady’s 7th Super Bowl win.

According to one “woke” Twitter user, “Tom Brady beating a black quarterback is fundamentally the most racist thing that can happen today.”

No, this is not fake news.

You have to hand it to these liberal “social justice warriors” – it takes a lot of effort to continually find racism and hatred in everyone and everything.

The irrational and illogical Tweets continued with one acknowledging that while Brady was the GOAT, because he is a Trump supporter and “it is not possible to be a Trumper without being a racist,” obviously the whole thing is one big ball of racism.

America is in a sad state of affairs when the radical Left brings race into things that have nothing to do with race.

Nancy Armour, a sports reporter at USA Today, wrote an op-ed last week expressing her fury and disgust at Brady for not apologizing for his “white privilege.”

This is the new America.

One where the mere fact that a person is white makes them racist.

The woke Left hates Tom Brady because he is one of just a handful of athletes and celebrities who have been brave enough not to cave to their mob intimidation tactics and political bullying.

Whether you like him or not, Brady is widely regarded as the greatest NFL player of all time, which has nothing to do with his “whiteness.”

But because he supported Donald Trump, his talents and abilities must be ignored, and everyone must agree that he is nothing more than a racist who flaunts his so-called “white privilege.”