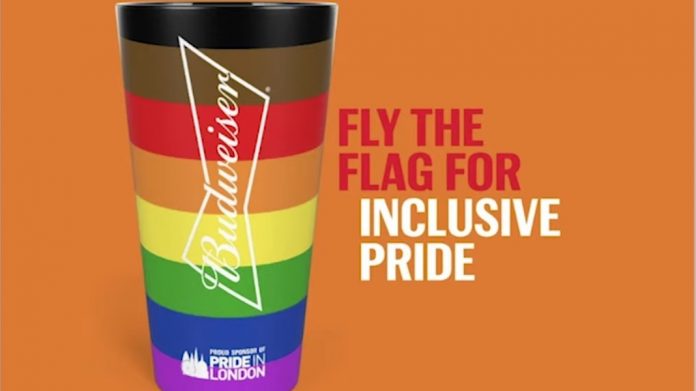 Many major companies are attempting to show how “woke” they are by releasing LGBT-branded products.

But Budweiser did something for LGBT Pride month that has made their customers furious.

This year, dozens of high profile companies have done something for LGBT pride month to appease their demands.

But Budweiser may have gone too far.

Some of the “themes” are so bizarre that you’ve likely never heard of them.

Like most major brands, Budweiser U.K. has launched a Pride-themed marketing campaign to capitalize on LGBT Pride month.

But unlike most brands, Budweiser didn’t simply decorate its marketing materials with rainbows or make a wishy-washy political statement about love. No. It launched an entire line of very specifically decorated cans designed to celebrate nine different LGBT lifestyles, some of which are pretty obscure.

The campaign is called “Fly the Flag,” and it gets very detailed

Excited to reveal we are now proud sponsors of Pride in London! We are working closely with them and our charity partners to celebrate the diversity within the LGBT+ community and Fly the Flag for everyone at the #PrideJubilee

A taste of what's to come… pic.twitter.com/g1FYlXqJJk

A couple of the flags are immediately recognizable. The first flag, in the upper left-hand corner, is the standard LGBT flag, updated with brown and black to incorporate “intersectionality” into the movement. The center can has the “Transgender Pride” flag, a recent — but now ubiquitous — addition to the Pride Flag family.

The cans look completely absurd and highlight how out-of-control LGBT propaganda has become.

Budweiser and other companies “celebrating” LGBT month are doing nothing more than pandering to the left.

Some may even be doing it out of fear, in hopes that radical LGBT activists don’t target their company for a boycott or protest.

Ever since Chick-fil-A’s CEO took a stand against same-sex marriage, the radical LGBT movement has not forgiven the tasty fast food chicken chain and still gives it trouble to this day.

Budweiser is either pandering to the Left or they have completely embraced the LGBT movement.

But customers in their traditional target market are furious and confused why Budweiser would do this to their cans and to their brand.

This may be a huge mistake on Budweiser’s part that could blow up in their face.

Should companies shamelessly pander to the LGBT lifestyle?