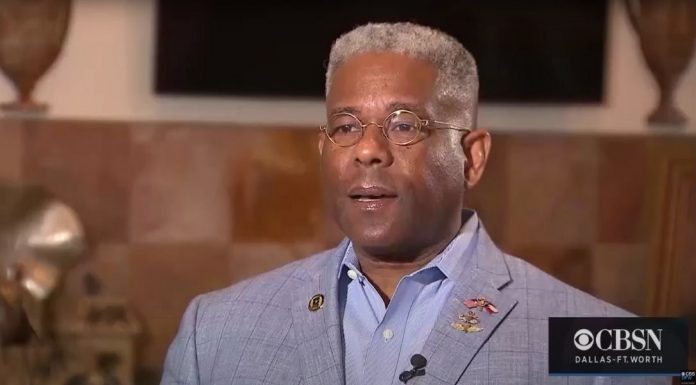 They’ve been getting more and more unhinged the closer it gets to the midterms.

And you’ll be red with rage over this violent woke mob’s excuse when they got caught on-camera turning on students.

A violent woke mob came after student organizers who invited Lt. Col. Allen West to speak on campus at the University of Buffalo.

Security had to escort Lt. Col West out of the venue after the speech.

On Thursday night, a mob of BLM activists, at the University of Buffalo, had to be held back by police as they tried to shut down an event featuring black conservative Allen West.

Soon, the organizers who invited West found themselves running for their lives.

She had to call 911 to be escorted to safety. pic.twitter.com/oK8onZbmWM

And the violent “woke” mob was after them for the worst reason ever.

Imagine calling someone who overcame racism a racist. Do better, University of Buffalo.@AllenWest pic.twitter.com/PLRMv7V3Kf

Lt. Col. Allen West was born in a black hospital and grew up in the same community as Dr. Martin Luther King, Jr.

But since he refuses to parrot leftist talking points, a woke mob of somewhere around 200 people went after him and the students who brought West to their New York State college campus.

As someone who has seen his share of combat, West told Fox News he wasn’t afraid for himself, but he was concerned about innocent students at the University at Buffalo who suddenly became targets.

He also pointed out the irony that leftists are all for free speech until someone is saying something they don’t want to hear.

“My elementary school was right across the street from Ebenezer Baptist Church. So if you want to talk about race and American exceptionalism,” West said. “Why shouldn’t a black man that was born 61 years ago in a blacks-only hospital, that rose through the ranks to become a lieutenant colonel when his dad was a corporal in the segregated Army, became a member of the United States House of Representatives?”

Then West pointed out the truth of the matter.

“These kids want to be victims,” West said. “They don’t want to hear that. They’re very militant, they’re very radical, and I’m glad that we exposed them.”

Student group president Therese Purcell was separated by the mob surrounding West and his security detail after his speech on campus when she turned to walk to her car.

“And then I realized that I was the target for these protesters and about 200 of my fellow students started hunting me down on campus, started chasing me screaming at me ‘go get her, go get her, go capture her, get the girl in the red dress,’” Purcell said during an interview on Fox and Friends.

Purcell started running for all she was worth.

From there it played out like a scene from a movie when one of her friends pulled her into a men’s bathroom to hide.

Meanwhile another student from her group was being kicked and punched.

Ironically, it was all because the students were doing something woke advocates supposedly want more people to do.

“While they were screaming that we were trying to silence black voices, we were actually trying to bring this conversation to campus,” Purcell said. “We had an open Q & A during the event but instead of asking peaceful questions, they decided to resort to violence.”

Democrats are the absolute worst racists around since they want to maintain control of entire demographics – and anyone who falls out of line is on increasingly dangerous ground.