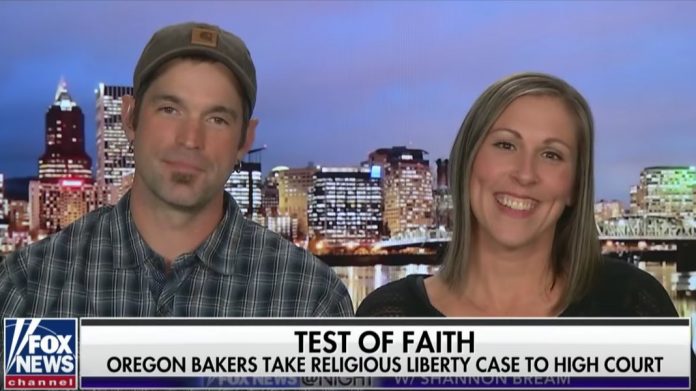 Liberals have a message to Christians: toe the line or lose your business.

They will stop at nothing to tear down freedom of conscience.

But now a new case could be heading to the U.S. Supreme Court to stop them.

Melissa and Aaron Klein, the owners of Sweet Cakes By Melissa, were fined $135,000 for refusing to bake a cake for a homosexual wedding.

The couple was forced to close down their business due to the fine and multiple death threats they received.

The couple has been fighting for their livelihood in the Oregon judicial system.

The Oregon Supreme Court declined to take their case.

Now the couple is clinging to the hope that the U.S. Supreme Court will stand up for Christian morals and freedom of conscience by deciding to hear the case.

The state of Oregon told them that they cannot decline to cater certain events that go against their religious convictions.

Oregon says they were discriminating against homosexuals.

But the couple have baked cakes for multiple gay clients in the past, with some being repeat customers, but have never baked a cake for a gay wedding.

The legal battle has raged on in the Oregon court system for years.

Recently, they spoke to Fox News’ Shannon Bream to explain everything.

This isn’t the first time liberals have sought to shut down Christian businesses.

The Supreme Court recently ruled in favor of Colorado baker Jack Phillips, owner of Masterpiece Cakeshop, who had a very similar situation.

The ACLU and State of Washington also filed legal proceedings against Florist Barronelle Stutzman of Arlene’s Flowers because she declined to provide flowers for a gay wedding.

Should Christian bakers be forced to cater gay weddings?

Tell us your thoughts in the comments.