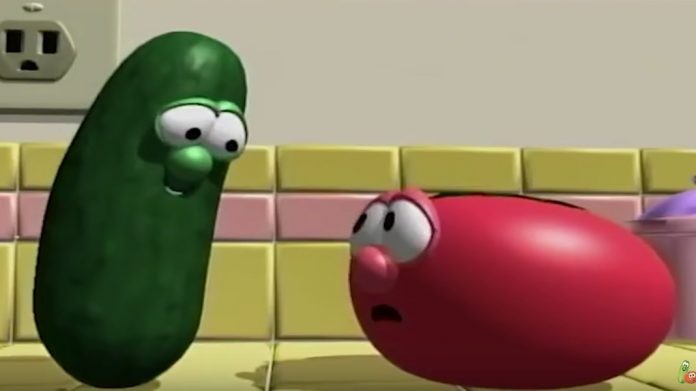 They attack it from the podiums, the television sets, and the movie theater.

But this latest attack on a classic children’s cartoon was a bridge too far.

They say it portrays so-called “vegetables of color” as the villains.

This was part of a “Whiteness Forum” at California State University San Marcos that sought to take a “critical look at whiteness” according to The College Fix.

Another project suggested that the children’s Christian television show, “VeggieTales,” perpetuates racial stereotypes. A female student who worked on the project said in an interview that the accents of the evil characters tend to sound ethnic, such as Latino, while the good characters sound white.

“When kids see the good white character triumph over the bad person of color character they are taught that white is right and minorities are the source of evil,” the project stated.
…
A student in Pindi’s class who attended the event for the extra credit also told The College Fix that he felt the forum accomplished just the opposite of promoting the notion of equality for all.

“I feel like the university system [leaders] are a bunch of hypocrites, they’re talking about stopping racism and promoting equality for all, yet they have no problem bashing white people,” the student said, adding he is half-Mexican.

But there’s one problem with this: the show actually teaches children to love others no matter how they look.

In an episode spin-off of The Grapes of Wrath titled “God Wants Me to Forgive Them!?” Junior Asparagus, a lovable, relatable character, is made fun of for looking different by a group of peas.

Junior’s character has an “afro” and is a different vegetable than them.

Junior’s father then came out and put the peas in their place by explaining to them that making fun of people who look different than you is wrong.

The daughter of the peas then ended up apologizing to Junior for her actions when she realized it was wrong.

VeggieTales is arguably the most successful Christian TV franchise.

The show’s entire premise surrounds the unconditional love of God and an emphasis on loving and accepting people who are different from you without compromising your values and integrity.

And it was a staple for millions of Christian children and taught them the value of love and friendship, values they hold to this day.

Do you agree with liberal academia that VeggieTales is racist? Let us know in the comments below.