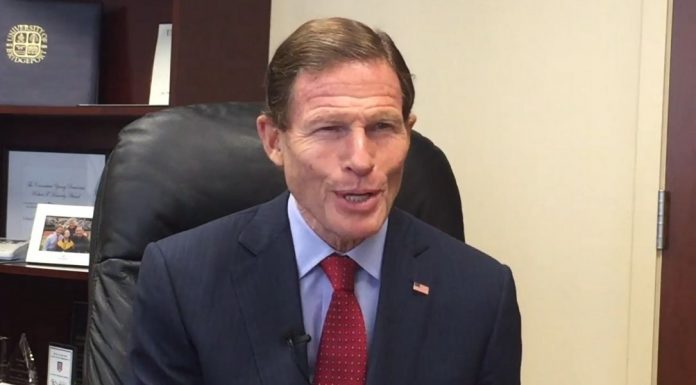 The Left doesn’t have a problem handing out getting cozy with shady individuals and painting on the veneer of credibility with favors and recognition.

But Party officials can’t believe the senior Democrat got caught and exposed ties they’d rather be kept secret.

And you won’t believe who this top Democrat Senator got caught red-handed passing “special recognition” for.

It’s a way they can paint a veneer of respectability onto some of the shadier folks they’re involved with.

But you’re not supposed to get caught.

Democrat Senator Richard Blumenthal of Connecticut was forced to issue an apology after he was caught attending a party with the Connecticut People’s World Committee, which is directly associated with the Communist Party USA.

Not only did Blumenthal attend, he also honored the award winners with “certificates of special recognition” from the United States Senate.

It appears after people caught wind of what Blumenthal had done his team came up with a plan to try and save face – apologize, but claim you didn’t know about the connection between the Connecticut People’s World Committee and The Communist Party USA.

In an interview with the Hartford Courant, Blumenthal claimed to be unaware of the connection.

“My understanding was that this ceremony was strictly a labor event. If I had known the details, I wouldn’t have gone,” Blumenthal said. “Let me just say very emphatically, I’m a Democrat and a strong believer in American capitalism. I have been consistently a Democrat and a strong supporter and believer in American capitalism.”

He also said that he’s really busy and details sometimes fall through the cracks.

Communist ties? That seems like a lot more than just a “detail.”

“We invite you to join the Communist Party in this epic time as we make good trouble to uproot systemic racism, retool the war economy, tax the rich, address climate change, secure voting rights and create a new socialist system that puts people, peace and planet before profits,” McManus said at the event.

To claim ignorance is a blatant lie on the part of Senator McManus and no one’s buying it.

Democrats want America to be a communist nation because they want control and this is just another example of an elected official trying to cover his tracks.