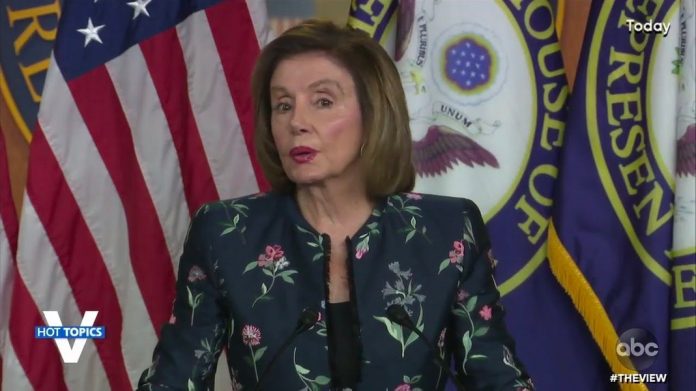 The Catholic church has found itself in the headlines a lot lately.

As Democrat politicians continue to flaunt their pro-abortion agenda, more dioceses are forced to take a stand for biblical truth.

And you won’t believe what Nancy Pelosi just said “as a devout Catholic” about abortion.

“As a devout Catholic and mother of five and six years, I feel that God bless my husband and me with our beautiful family, five children in six years almost to the day. But it’s not up to me to dictate that that’s what other people should and it is an issue of fairness and justice for poor women in our country.”

Once again, a leftist claiming to be a Catholic, stands in support of abortion.

Politicians like Nancy Pelosi and Joe Biden make a mockery of the Catholic church and its centuries of biblical teachings.

Pelosi also stated, falsely, that Democrats have not blocked Republican attempts to ban taxpayer funding of abortions before going on to describe taxpayer-funded abortion as “an issue of health, as an issue of fairness.”

In May, Pelosi’s Archbishop, Salvatore Cordileone, stated that he has had repeated conversations with Pelosi about abstaining from receiving Holy Communion at mass as a pro-abort Catholic.

“Because we are dealing with public figures and public examples of cooperation in moral evil, this correction can also take the public form of exclusion from the reception of Holy Communion,” Cordileone wrote.

And it didn’t take Cordileone long to respond to this latest Pelosi nonsense.

“Let me repeat: no one can claim to be a devout Catholic and condone the killing of innocent human life, let alone have the government pay for it. The right to life is a fundamental – the most fundamental – human right, and Catholics do not oppose fundamental human rights,” Cordileone’s letter began.

Cordileone continued by calling out the hypocrisy of supposed Catholics like Pelosi and Joe Biden.

“To use the smokescreen of abortion as an issue of health and fairness to poor women is the epitome of hypocrisy: what about the health of the baby being killed?” Cordileone continued.

These supposed “devout” Catholics like Pelosi and Joe Biden are spreading a message that abortion is acceptable among Christians.

Just last week, a New Mexico State Senator took to Twitter to complain that his bishop denied him communion because of his “political office.”

Of course, Senator Joe Cervantes was sorely mistaken given that his denial of communion was because of a vote he recently cast in the New Mexico Senate in favor of a pro-abortion bill, not because of any party affiliation.

Cervantes also neglected to tell anyone that the diocese tried on several occasions to get in touch with him to tell him he would not be allowed to partake of communion because of his vote, but the Senator never returned the calls.

Instead, he decided to make a public display of his abhorrent views on abortion.

Democrats could care less what the Catholic church, or any Christian church for that matter, says about abortion.

It’s not about espousing biblical truths or really espousing any truth at all for them.

Nancy Pelosi and her circle of radical leftist friends believe that murder is acceptable and have no regard for innocent human life.

This type of immoral thinking should scare Americans because who knows what the Democrats will find acceptable next.