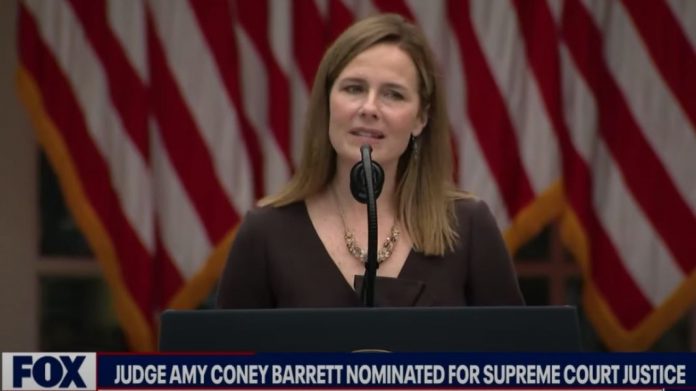 Leftists and the Fake News Media have been losing it ever since Justice Ginsburg died.

And they would do anything to stop President Trump’s Supreme Court nominee.

But you won’t believe what leftists are attacking President Trump’s Supreme Court nominee over.

The Left and the Fake News Media could see the writing on the wall when Justice Ginsburg died over a week ago.

They knew that President Trump would nominate a replacement to the Supreme Court with the Republican Senate very likely to confirm his pick.

As they did with Justice Kavanaugh, leftists and the Fake News Media will do whatever they can to destroy Trump’s nominee.

What was their first line of attack?

Leftists actually had the nerve to go after her for adopting two children from Haiti.

Dana Houle, a prominent staffer for the Democrat caucus for both chambers of Congress, tweeted out, “love to know which adoption agency Amy Coney Barrett & her husband used to adopt the two children that they brought from Haiti.”

Continuing on his attack, Houle tweeted, “So here’s a Q: Does the press even investigate details of Barrett’s adoptions from Haiti? Some adoptions from Haiti were legit. Many were sketchy as hell. And if the press learned they were unethical & maybe illegal adoptions, would they report it? Or not bc it involves her children.”

Supporters of Judge Amy Barrett defended her and fought back at the low blow of criticizing her for adopting children from Haiti.

Senator Josh Hawley (R-MO) agreed with Senator Cotton and tweeted, “Read this from Democrat activist & Hill staffer. Questioning whether #AmyConeyBarrett *illegally* adopted her children from Haiti, maybe snatching them from birth parents! This is the Dem gameplan. Nothing but raw bigotry and hate. I promise you, this will not stand.”

Leftists are desperate to find anything they can to stop the confirmation of Judge Amy Barrett.

But hopefully, the Republican-controlled Senate won’t fall for the Left’s tricks and will confirm Judge Amy Barret before the election.