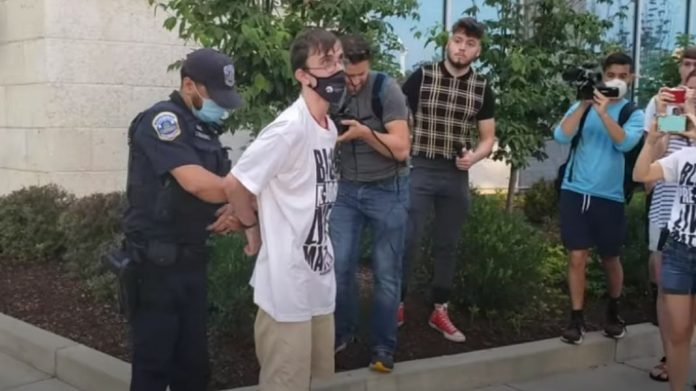 Students for Life of America (SFLA) is a pro-life student activist group with chapters across the United Sates dedicated to ending the sick practice of abortion in our lifetimes.

Naturally, the Left despises them.

But all hell broke loose when these pro-life students stood up to the Abortion Lobby and Black Lives Matter at the same time.

Two students were peacefully protesting outside of a Planned Parenthood facility in Washington, D.C. when everything spiraled out of control.

The students had even requested a permit for the protest and were using sidewalk chalk to write messages on the street that can easily be washed away.

The students wrote, “Black pre-born Lives Matter” in chalk on the sidewalk when the police decided to stop them.

One of the students being arrested attempted to reason with the arresting officer but he refused to listen.

You can listen to the full story on Tucker Carlson’s show below:

These pro-life students wrote, “Black pre-born Lives Matter” on the street to call out the fact that abortion affects African-Americans in greater numbers and the founder of Planned Parenthood, Margret Sanger, was openly racist and hoped to wipe out the African-American population through abortion.

This inconvenient fact is not known by many and often falls on deaf ears.

The Left absolutely doesn’t want voters to discover this fact or they would be in big trouble at the polls.

One of the reasons this case is so absurd is that Washington, D.C. has approved dozens of painted murals across the city dedicated to Black Lives Matter.

All across the city there is spray painted graffiti containing curse words, racial slurs, and politically charged statements.

But for some reason a pro-life message written in sidewalk chalk is a violation of city rules and regulations . . .

The students are working with Students for Life of America and their legal team to now pursue a lawsuit against the city for violating their First Amendment rights.