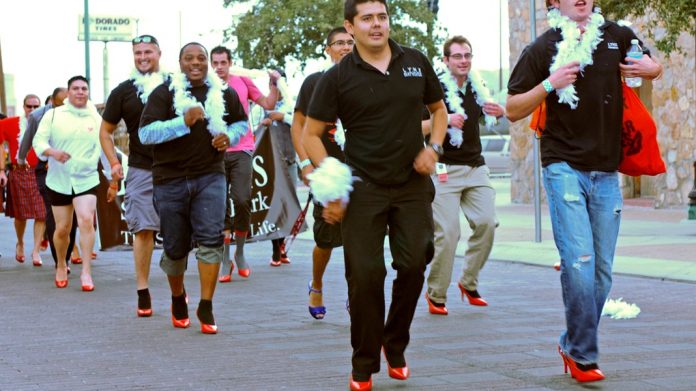 The Fake News media has turned into a print version of the Jerry Springer show.

They push absurd stories and try to pass of freakish behavior as “a growing trend.”

They say that men are purchasing Stilettos at an alarming rate.

Shaobo Han put on his first pair of heels at age 11. The pair wasn’t Han’s, exactly—he’d stolen them from his mother, to practice “prancing around the house when no one was around.” Han thought that boys weren’t supposed to wear heels, so he made sure to play with them in private…

Han grew up to be a graphic designer, along the way running the femme footwear line Syro with business partner Henry Bae. The Brooklyn-based company sells heels and boots in men’s sizes 5-14. The styles are chic and trendy—plaid, patent, over-the-knee—but not gaudy à la Kinky Boots.

Whether a customer is male, trans, or non-binary, the mission of Syro is to promote femininity and encourage a fluid sense of style.

“We get emails where kids are saying how grateful they are to discover us, which is really heartwarming,” Han said. “They tell us that they’re wearing them to prom, or to a wedding. Those spaces are so gender-confirming so it’s nice to provide them a way to express themselves and challenge norms.”

This “trend” comes on the heels of the resurgent drag queen movement.

Sadly, this isn’t confined to adults.

Two pre-teen boys, whose “drag names” are “Lactacia” and “Desmond is Amazing” have become icons in the drag scene.

The “progressive” media can kill two birds with one stone.

First, they get to disgustingly sexualize children.

Second, they can use this filth to attack all traditional gender norms.

Do you think men should wear Stilettos? Let us know your thoughts in the comments section!