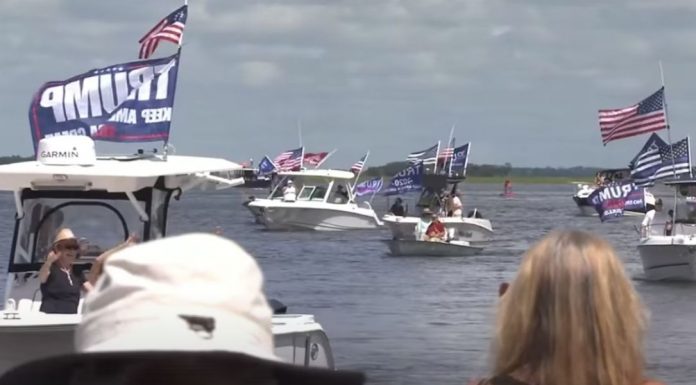 Ever since President Trump launched his campaign, Leftist have viciously attacked his supporters.

And the attacks have only been getting worse throughout 2020.

But you won’t believe the new low Leftists have gone to as they mock life-threatening situations for these Trump supporters.

There is no hiding the fact that the Fake News Media and Leftists can’t stand Trump supporters.

From being mocked on live TV to being physically assaulted, Trump supporters have been on the receiving end of countless attacks by Leftists.

Now they have sunk to a new low as they mocked the life-threatening sinking of boats during a “Trump Boat Parade” over the weekend.

Trump boat parades have been going on all summer and show just how enthusiastic Trump supporters are heading into the election this November.

Tens of thousands of boats have taken part in Trump boat parades in various waterways across the nation.

And to help celebrate Labor Day, numerous boat parades were held from Virginia to California.

One of those parades took place in Lake Travis, Texas where hundreds of boats paraded across the lake as they proudly displayed their support for President Trump.

Sadly, up to five boats dangerously sank in the parade due to wake from the sheer number of boats taking part in the event.

And when the Fake News Media and Leftists saw this, they pounced at the opportunity to mock these Trump supporters as their lives were threatened.

MSNBC host Lawernce O’Donnell mockingly tweeted, “What word would Trump use for these people?”

Another Leftist on Twitter sarcastically labeled the horrible situation “The miracle at #Dumbkirk.”

Another Leftist responded, “this is f***ing hilarious. a literal blue wave. i mean. you can’t make this shit up.”

As lives were in danger, Leftist didn’t stop their attacks against Trump supporters.

And we can only imagine that the attacks will get worse as the election draws near.