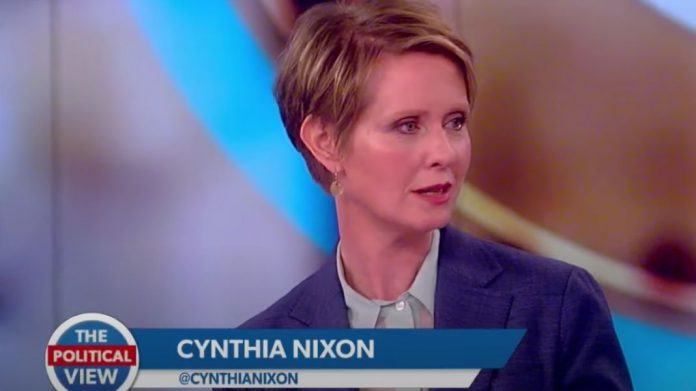 The Sex and the City star tried to put a stop to Andrew Cuomo’s Governor’s office sex scandals by jumping in to challenge his 2018 re-election.

And you won’t believe her cringe-inducing demand to go back to work after she got flogged by Andrew Couomo.

And a “woke” TV reboot only happened for one ridiculous reason.

HBOMax’s Sex and the City reboot – And Just Like That is getting panned by critics.

People on both the Left and the Right find the politics of the show about as subtle as a sledgehammer.

Original cast member Kim Cattrall had zero interest in coming back for the reboot, and fellow cast member Cynthia Nixon only agreed to come back if the show was more “woke.”

Nixon said in an interview:

“It was a very hard decision. I really didn’t think I was going to do it — I was very reluctant…But the more I talked to Sarah Jessica, [writer-creator] Michael Patrick King, and Kristin [Davis], about the things that I couldn’t go back without — a real sea change in terms of the lack of diversity in the original series, they were on board…I’m very proud of the original series — despite it being occasionally tone deaf on race and gender.”

Nixon got her wish, as the show is chock full of cringeworthy moments.

Some that even fall flat in delivering on Nixon’s woke goals – exposing the idiocy of it all.

Everything Woke turns to sh*t.

Add the Sex And The City reboot to that list. pic.twitter.com/rEA4hzu8YV

Whether on purpose or inadvertently writers essentially called Nixon’s character a “karen” in that scene.

Nixon crashed and burned in her 2018 bid for governor of New York.

A dyed-in-the-wool progressive, Nixon once said during her campaign that Democrats should embrace the word socialism.

If she hadn’t said such idiotic things, perhaps creepy Cuomo may have been stopped from harrassing some of his victims.

And Just Like That had no chance of being any good with that type of mentality seeping into the show.

Sex and the City was always about the glamor of being upper class in New York City; the show wasn’t and isn’t equipped to be a commentary on class struggle or anything of the sort.

But leftists cannot help themselves.

They have to shoehorn in their politics, even where they don’t belong.

As a result much Hollywood fare has become unwatchable.

Hollywood can’t get away from their remake/reboot/sequel/prequel funk.

They think audiences will love them all over again if they just mix in some wokeness.

It’s a recipe for disaster, and the viewing public is worn out by it.

But don’t count on it – leftist creators will likely remain hellbent on infusing their movies and shows with progressive messages.