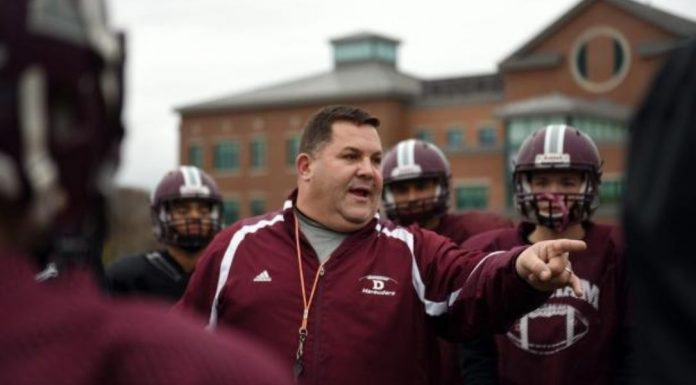 The Left continues to cancel celebrities and CEOs for believing differently from them.

Now, though, everyday Americans are suffering from liberals’ continued fight to destroy anyone who does not spew their propaganda.

And you are not going to believe what this high school football coach was just fired for.

A Massachusetts public high school football coach was fired from his job after complaining to school district officials, as well as parents, about the left-wing curriculum being taught in his daughter’s middle school class.

According to Flynn and his wife, the class was not teaching what it claimed.

In a lawsuit, Flynn claims “the instruction concerned issues of race, gender, stereotypes, prejudices, discrimination, and politics, among others.”

In one assignment, Flynn’s daughter was asked to “consider various ‘risk factors’ and ‘mitigating factors’ that two people — one identified as ‘white’ and the other identified as ‘black’ – might use to assess each other on a city street.

‘Black,’ ‘aggressive body language’ and ‘wrong neighborhood’ were among the ‘risk factors’ assessed by the person identified as ‘white.’

‘White’ and ‘Police officer’ were among the ‘risk factors’ assessed by the person identified as ‘black.”

The lawsuit also states that Flynn and his wife saw in-class materials of a “cartoon version of their daughter’s teacher wearing a Black Lives Matter T-Shirt.”

Flynn took his concerns up the chain at his daughter’s middle school and informed other parents of what was being taught.

On January 20 of this year, Flynn was told in a meeting that the district was “going in a different direction” with the football program and that he was being let go.

Seems Coach Flynn’s services were not needed once they discovered he didn’t like leftist propaganda being shoved down his unsuspecting daughter’s throat.

The Left will stop at nothing to indoctrinate America’s youth.