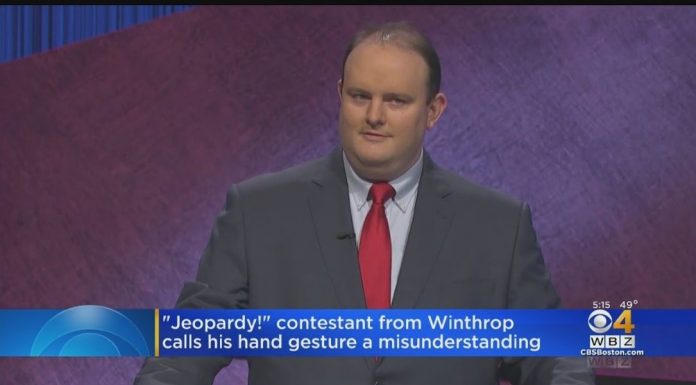 Cancel culture has reached a point that’s beyond parody.

Far-left radicals are scraping the bottom of the barrel in pursuit of “problematic” persons.

And the “woke” outrage mob just went after one Jeopardy! contestant and the reason why will make your blood boil.

Radical leftists have shown that they don’t even need a reason to “cancel” someone.

Jeopardy! contestant Kelly Donahue found that out the hard way.

During his fourth appearance on the show, Donahue held up three fingers to signify his three victories.

But the insane mob accused Donahue of flashing the “okay” symbol, which the Left insists is a hand gesture that signifies “white power.”

First, the “okay” hand gesture as a supposed symbol of white power started as a joke on the deep web site 4chan.

Users wanted to see if the corporate-controlled press would run with the joke, and they did.

Second, Donahue was very clearly holding up three fingers to signify his wins.

That sober description didn’t satisfy the mob, and Donahue was hit with a deluge of hate.

Donahue then issued another statement that was more sympathetic to the insane Left:

“I’m truly horrified with what has been posted about me on social media. I absolutely, unequivocally condemn white supremacy and racism of any kind . . . I deeply regret this terrible misunderstanding. I never meant to hurt a soul and I assure you I am no friend of racists or white supremacists.”

Unfortunately, a small number of cultists have been given outreached social power.

Only a lunatic fringe could believe Donahue was flashing a hate symbol (which isn’t even a real hate symbol) during an appearance on the most recognizable game show in the world.