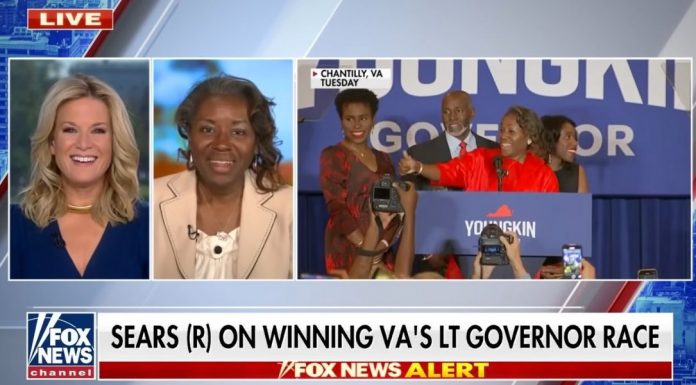 And Winsome Sears just demolished this Democrat and the media’s lies.

And she’s standing up for parents worried about what’s being shoved down their kids’ throats.

The immigrant from Jamaica, whose father showed up in the US with $1.75 in his pocket, also knows what real history—and making history—looks like.

Even after Democrats were defeated soundly in the November elections, the party’s press branch, also known as CNN, continues to argue that Critical Race Theory (CRT) isn’t part of public schools’ curriculum.

By now it’s woven into the very fabric of how teachers are expected to do their job.

Since they started facing serious backlash from parents this year, leftists have been doing some fancy footwork to pretend that they aren’t brainwashing America’s children to support their radical political agenda.

But Sears refuses to let CNN—or anyone else—spin the story for their own political gain.

The groundwork for the leftist takeover of America’s classrooms has been underway for decades.

In other words, first they’re going to throw out the use of logic then tackle numerous far-left “concepts and theories” including: “storytelling, interest convergence theory, the social construction of race, the black-white paradigm, the myth of the model minority, intersectionality, essentialism, working identity, covering, whiteness and white privilege, color blindness, microaggressions, and implicit bias.”

It would be bad enough if this were merely how eccentric academics waste higher education dollars along with their students’ time.

Unfortunately, it looks like we’ve found the actual formula used to turn out modern “snowflakes” from our school systems—and those concepts have filtered down through every level of academics.

Every day we see new proof they are now oozing out into social media and corporate culture.

So, it’s no wonder a strong conservative black woman like Sears has zero interest in putting up with media lies designed to make angry Republicans (along with plenty of intelligent Independents and Democrats) look the other way.

Instead, she’s standing by what Governor Glenn Youngkin campaigned on when he won over Virginians this year: all history needs to be taught including, “the good, the bad, and the ugly.”

While proponents of CRT try to rewrite history, Sears says we need to look at black success stories worth emulating.

That approach also seems like the best way to honor the slaves who helped build the country through their hard work—rather than tear the country to pieces.

It seems likely early black leaders such Harriet Tubman and George Washington Carver would have sided with Winsome Sears on this one.

After all, real trail blazers tend to have bigger fish to fry than “microaggressions” and “implicit bias.”