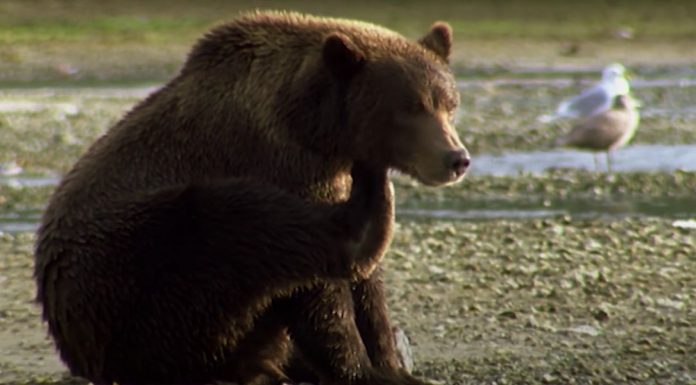 Out in the Western United States, a grizzly bear is one of the last things you want to come face to face with in the wild.

But sometimes mother nature turns the tables on even the most fierce predator.

And one grizz just learned the hard way that it isn’t always on top of the animal kingdom.

Everyone always thinks of places like Australia as having the craziest wildlife imaginable.

But come to find out, America can hold its own with any nation in the category of insane and dangerous animals.

Where else in the world would you be terrorized by something as small as a murder hornet all the way up to the mountain lion and massive apex predators like enormous Great White sharks?

Here’s a shocking video of a diver’s close encounter with the Great White Shark — one of the world's most deadly attackers! — while spearfishing off the coast of North Carolina, US. #Sharks #GreatWhiteShark pic.twitter.com/ZNJH9vPOJy

But of all the animals causing nightmares out in the West, none is more terrifying than the grizzly bear.

The grizzly bear is vicious and relentless when it locks onto its prey.

But even the killing machine of the grizzly bear gets its butt whooped every once in a while.

And one grizzly was in fear for its life after it attacked a moose calf.

Visitors in Many Glacier, Montana witnessed something many will never see in their lifetime.

A grizzly bear was on the attack as it tried to takedown a moose calf.

The only problem was mama moose was having none of it.

And all of a sudden the tables turned on the bear as it went from the hunter to the prey.

The mama moose had the grizzly in so much fear that the bear even ran straight into a fence about knocking it out.

You just have to see it to believe it.