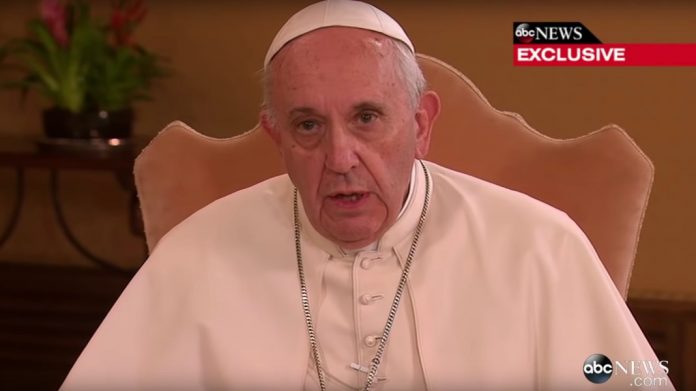 Pope Francis is an avowed Socialist.

And he has been using the chair to bash capitalism in every possible way.

Now, Pope Francis’ Vatican News was forced to delete a telling article for this shocking reason.

Vatican News is the information system of the Pope that was established by Pope Francis in 2015.

It hailed the revolution responsible for the bloodshed of tens of thousands and the oppression of an entire nation locked from the outside world as “the beginning of the revolution of the victory of the counterculture,” PJ Media Reports.

According to PJ Media:

Below, read an excerpt of the Vatican News post (English via Google Translate):

The Cuban Revolution celebrated its 60th anniversary this January 1, 2019. On the island, the historic anniversary was celebrated with a ceremony in Santiago de Cuba, in the cemetery of Santa Ifigenia, where Fidel Castro is buried, who died on November 25, 2016. To the main national forces on January 10, 1959, the dictator Fulgencio Batista fled 26 months of guerrilla war led by brothers Fidel and Raul Castro. From Santiago, Fidel Castro proclaimed the beginning of the revolution the victory of the counterculture.

Batista was president of Cuba from 1952 to 1959 before being overthrown during the violent Cuban Revolution. Fidel Castro turned the formerly prosperous island nation into a one-party communist system, transforming it into the impoverished and closed society it is today.

Following the revolution, the new Cuban government declared itself officially atheist and nationalized all property held by religious organizations, including the Catholic Church. Before Castro’s assault on the Church, more than 90 percent of Cubans were Catholic. Hundreds of them, including a bishop, were permanently expelled from the nation.

Vatican News immediately deleted the article when faced with a tidal wave of backlash from Catholics.

Sadly, the socialist love-fest of Pope Francis is hardly anything new.

As we reported, in a secret meeting Pope Francis told Michael Moore that capitalism is “sinful.”

The Pope has also blamed corporations for causing so-called “global warming” and floated economy-killing regulations as a response.

Do you think that Vatican News was out-of-line for celebrating the brutal communist Cuban Revolution? Let us know your thoughts in the comments below.