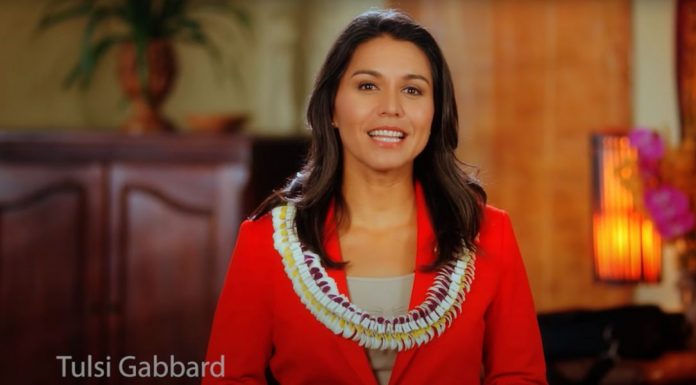 The View skews further to the far-left everytime you turn around.

But The View’s lead harpie Whoopi Goldberg is just getting started.

And Whoopi Goldberg put her foot in her mouth again on The View with one bone-chilling demand.

With every switch in co-hosts, it seems the The View skews further to the far-left.

These hosts are known for their history of radical comments.

But now they took their insanity to new levels when they suggested Tucker Carlson and Tulsi Gabbard should be imprisoned on a recent panel.

Lead harpie Whoopi Goldberg is back on The View following her suspension for her absurd on-air statement that the holocaust wasn’t about race.

Meanwhile, Goldberg and co-host Anna Navarro – who still insanely claims to be a Republican – though she hasn’t made a single positive comment about Republicans in her time on the show – are bringing back McCarthyism-type tactics and policies.

They believe Tucker Carlson and Tulsi Gabbard should be sent to jail for alleged treasonous support of Russia.

And the other ladies of the show didn’t object either.

“I think DOJ (Department of Justice) in the same way it is setting up a taskforce to investigate oligarchs, should look into people who are Russian propagandists and shilling for Putin,” former Jeb Bush staffer Navarro said.

So, what did Carlson and Gabbard say to warrant investigation and arrest from federal officials?

Gabbard put out a video saying she didn’t think it would be good if Vladimir Putin gets his hands on existing U.S. bio-labs in Ukraine.

In a segment on his Fox News Channel show, Carlson simply agreed with Gabbard.

What traitors, lock them up!

This isn’t the first time the radical Left has come after Gabbard in regards to Russia.

During the 2020 Democrat Presidential primary, Crooked Hillary Clinton accused Gabbard of being a Russian asset, and said Putin was grooming the former Hawaiian Congresswoman to mount a third-party bid for the White House.

Simply because Russian media was providing a little bit of coverage of the Gabbard campaign at the time.

Meanwhile, Democrat Congressman Eric Swalwell admitted to a long-term sexual relationship with a known spy of one of America’s enemies and he’s still in Congress.