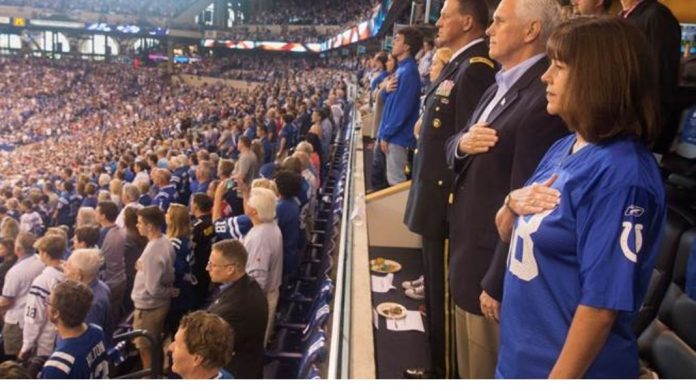 The anti-American NFL anthem protests are heating up again.

Leftists are pushing harder than ever to disrespect the country.

And what this reporter just said about the NFL’s anti-American anthem protests will infuriate you.

In 2016, quarterback Colin Kaepernick started the NFL anthem protests by first sitting, then kneeling during the “Star-Spangled Banner.”

At the time, only about 20% of Americans supported protesting the national anthem.

After Kaepernick received intense media support and accolades from left-wing organizations and endorsement deals, the number grew to roughly 40%.

In light of the murder of George Floyd and an unrelenting push from the left-wing media, the anthem debate has been revived.

Future Hall of Fame quarterback Drew Brees said he would never disrespect the flag or the anthem, and he was pilloried for those benign comments.

He was forced to publicly apologize three times – and his wife apologized a fourth time – after being hit with an endless barrage of criticism.

Now sports commentator Rob Parker thinks the national anthem should be banned altogether from the NFL.

Parker said, “First order of business, eliminate the playing of the national anthem before each game . . . [I]t would show the rest of America that the NFL, an iconic part of this country’s history, was embracing change . . . And that, brace yourself, the good-ole boys finally get it.”

Parker is no stranger to controversy.

He once referred to quarterback Robert Griffin III as a “cornball brother” who’s “not really downwith the cause.”

Many NFL players have already said they will kneel for the National Anthem during the upcoming season.

This is precisely how the Left operates.

They choose a target and go after it unrelentingly until it caves.

The NFL has essentially bent the knee to the radical Left.

People who are in favor of kneeling use the common refrain that they’re not disrespecting the anthem or the country, they’re simply protesting police brutality.

But Kaepernick’s protest was explicitly anti-American, as are his radical politics.

The NFL is about to embrace radicalism, which will most certainly drive away fans as it did in 2016 and 2017.

Will the NFL cave to the mob and outright ban the national anthem?