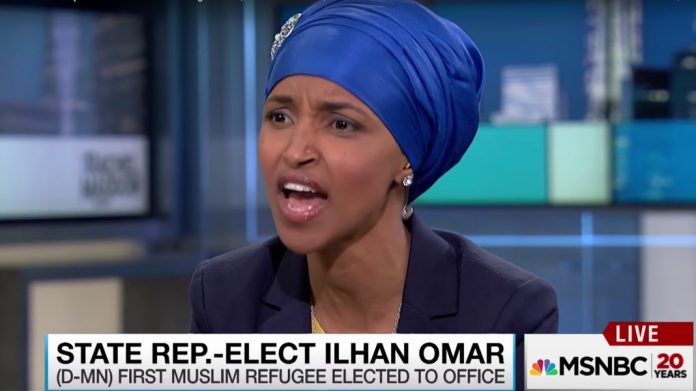 She made national headlines for statements about Israel, including asking “Allah to awaken the people and help them see Israel’s evil doings.”

And how she’s trying to import Sharia Law into the U.S. will make your blood boil.

Ilhan Omar is back in the news for proposing to lift the ban on wearing headwear in Congress so that she can wear her hijab.

And she has full backing from the Democrat Party.

The Hijab is a central tenet of Sharia Law.

Women have been arrested – and worse – in Islamic nations for refusing to wear it.

The change is part of a scope of new rules that Democrats are planning to implement once they take control of the House next year following their sweep of seats across the country during this month’s midterm elections. The party picked up at least 37 seats, wresting control from the Republicans after eight years.

Omar posted a screenshot of a news article related to the ban on Instagram late Sunday.
…
She also said it’s not the only ban she would work to lift, but didn’t specify any others.

The Washington Post notes that the proposed rule ― of which Omar is a co-author alongside House Democratic Leader Nancy Pelosi (Calif.) and Rep. Jim McGovern (D-Mass.) ― would allow all religious headwear on the House floor.

But they never cared about headwear when Jewish candidates were elected into public office.

Rahm Emanuel wears a yarmulke as an orthodox Jewish person and was a congressman for years and the Democrat Party never discussed changing the rules for him.

He had to take his yarmulke off when he entered Congress.

Many believe the hijab is a symbol of oppression.

But many so-called “progressives,” including leaders of the anti-Trump “Women’s March,” have adopted it as a symbol of the “resistance.”

Do you think Congress should lift the ban on headwear so that Omar can wear her hijab?

Let us know your answer in the comments!