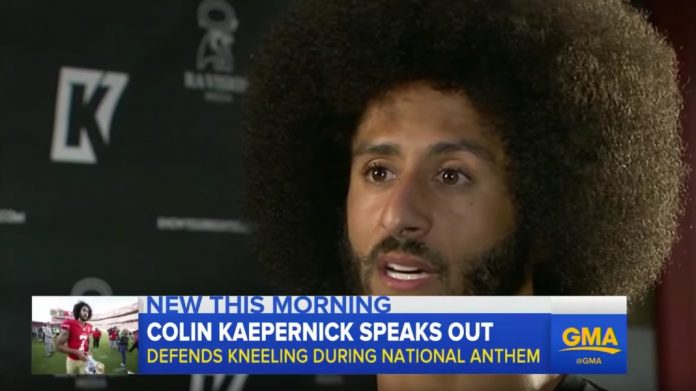 This has resulted in him angering millions of patriotic Americans.

But what this Gold Star mom said about Kaepernick will put tears in your eyes.

Colin Kaepernick moved from being a barely known, mediocre football player to a far-Left hero overnight when he refused to stand during the national anthem.

But since he first made that stand, he has lost his spot in the NFL, and is instead living off of a multi-million-dollar marketing deal with the shoe company Nike.

And using his influence in the company, he forced them to pull a shoe featuring the Betsy Ross American flag.

In response to that, Gold Star mom Amanda Jacobs had a few choice words for Kaepernick while speaking at the Independence Day “Rally For Freedom” in Washington, D.C.

That’s what we are here for today — not because, you know, I wanted to be a Gold Star mom. I got gold stars in school for making grades. But this Gold Star that I wear every day isn’t for me. It’s because of what my son chose to do — without my permission, trust me. I have a 17-year-old that is doing the same thing, and it’s because of what they believe.
I hear these Marines that come to my house — and they stay for four days, you know I’ve got 30 Marines that sleep on my floor, and it’s great — but they tell us that the only thing that kept them going is when they could look up and see that flag. They had hope to go back home to, and a hope that this country was going to change for the better — not for the worse.

You can watch the entire speech below in a video provided by Breitbart News:

The last words of her speech were not covered in the video, but may be the most touching of all.

“My son’s words were, ‘Mom, I’m not fighting for the ones in the White House. I’m fighting for you and my brothers in this yellow house,’” she said.

Jacobs’ son had more bravery and respect than Kaepernick ever will.

And everytime Kaepernick attacks the American flag, he is attacking heroes like him who lost their lives for their country.

What do you think of Colin Kaepernick?