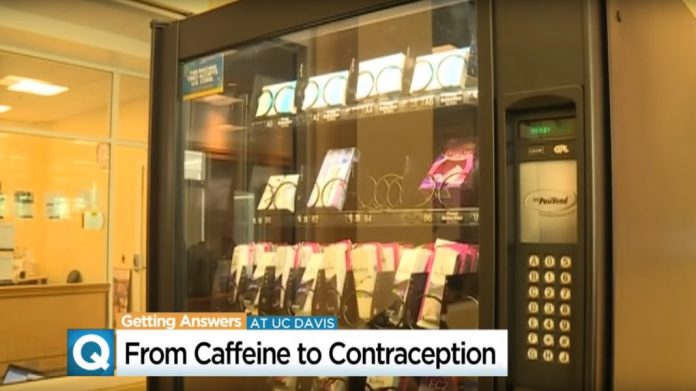 America’s colleges are the top targets for Planned Parenthood’s propaganda.

But now some schools are taking an unprecedented step that had abortionists singing in the streets.

Stanford University, Columbia University, and Dartmouth College are just a few names on the list.

The stated purpose was “to remove barriers to and anxiety surrounding products like Plan B,” The Wall Street Journal reports.

But the reality is this will just end up increasing the number of abortions.

One college, Barnard College in New York, is among the most recent to add these vending machines to its campus.

Access to emergency contraception has grown significantly since Plan B, sometimes called the morning-after pill, came to market in 1999. It is now sold over the counter to customers, regardless of age.

Many schools offer free or reduced-cost emergency contraception in their student health centers.

But campus medical offices or pharmacies aren’t always open when the pills are most needed, including on weekends, students say. They also may prefer the anonymity of buying from the machine.

The vending machines haven’t prompted public objections on campuses, where they’re largely seen as an extension of existing services. The machines on most campuses, small boxes attached to a wall or dispensers resembling those for Snickers or soda, also sell other health products like cold medicine and condoms.

Liberal academia and Planned Parenthood have brainwashed college students to think that abortion-on-demand should be done from the convenience of a vending machine.

In the same way a person buys a bag of Cheetos, they can now abort a baby.

Their end goal is to make abortions seem cheap and easy.

Over 60 million babies have been murdered since Roe v. Wade, and this will no-doubt add to the number.

This complete disregard for human life is sickening.

Do you think schools should install abortion pill vending machines? Let us know your thoughts.