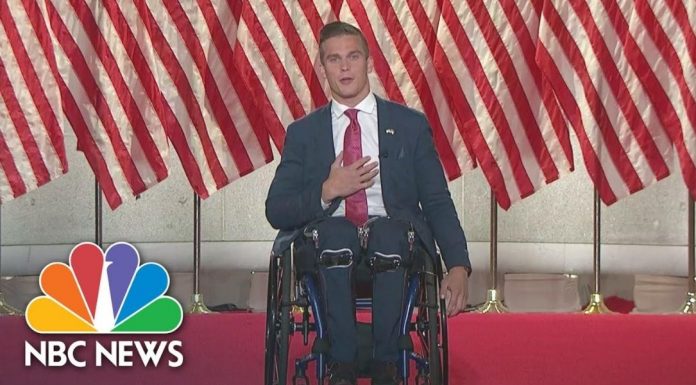 They will cross any line to attack them.

And what the left-wing media did to attack a 25-year-old Christian Republican will make you sick.

Madison Cawthorn was just elected as the third youngest member ever in the U.S. House of Representatives.

The North Carolina native who was left wheelchair-bound after getting into a car accident in 2014 made national headlines after standing for the National Anthem at the Republican National Convention.

Because of his growing profile, he faced intense attacks.

In August, he was attacked for visiting the Eagle’s Nest, which was Adolf Hitler’s vacation home during a trip to Germany, where he visited historical sites.

The media tried to infer he was in support of Hitler simply for visiting the historical site.

Their attacks clearly didn’t work, as he was elected in November.

But even after the election their attacks are continuing.

Now they are attacking him for being a Christian.

In a headline in the far-left Daily Beast, they state,  “Newly Elected GOP Congressman Madison Cawthorn Has Tried to Convert Jews to Christianity.”

The start of the hit piece immediately references the previous Nazi attack before trying to paint evangelicalism as a bad thing.

“In an interview with Jewish Insider, the 25-year-old, who came under fire for selfies he took at Hitler’s vacation retreat in Germany, claimed he had converted ‘several Muslims to Christ’ and several ‘culturally Jewish people,’” the trash article reads.

This article will likely make any Christian like Cawthorn more than they did before.

But it shows that the left-wing media sees the idea of a Christian trying to convert somebody to their faith is a bad thing that deserves being attacked in the media.

Any real Christian will agree that it is the job of Christians to try to convert others to their beliefs.

If someone truly believes that their religion is the only way towards true salvation, why wouldn’t they?