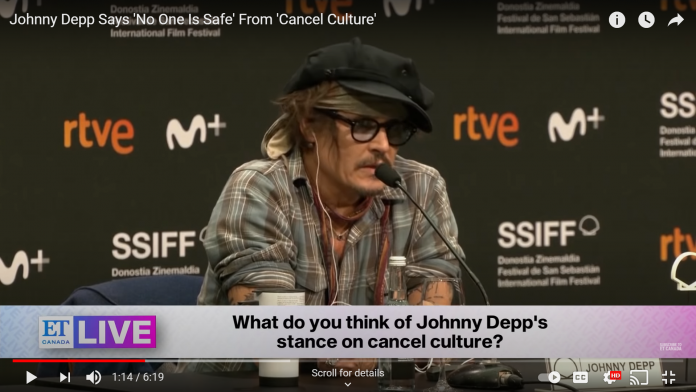 2020 brought about a lot of unpopular things like masks and lockdowns and social distancing.

One thing 2020 became notorious for was the rise of cancel culture.

And what Johnny Depp just said about cancel culture sent the left-wing outrage mob on a rampage.

The cancel culture mob has taken down everyone from Chrissy Teigen to Dr. Seuss.

An entire group of people have gained an incredible amount of power via the Internet – largely on social media – and are able to blacklist well-known personalities they don’t like or agree with.

In recent months, a number of Hollywood A-listers have started to speak out against cancel culture and how destructive it has become.

Johnny Depp is the most recent celebrity to take on cancel culture, which in a way is shocking, since he isn’t known for being much of a talker.

Depp told a film festival audience this week that “no one is safe, not one of you,” because of cancel culture.

The actor said it only takes one sentence to have the proverbial “carpet” pulled out from under you.

When asked to elaborate on his thoughts, Depp stated that cancel culture has gotten “so far out of hand now that I can promise you that no one is safe, not one of you.”

Johnny Depp is in good company when it comes to celebrities speaking out against cancel culture.

This past summer founding member of Mumford & Sons, Winston Marshall, said goodbye to the band after being targeted by the cancel culture mob for praising journalist Andy Ngo who is best known for exposing the radical left-wing terrorist group, Antifa.

When discussing jokes that could be misconstrued by the #MeToo movement, Jay Leno said “you either change with the times or you die.”

People have become so sensitive and unable to take a joke that they demand anyone who hurts their feelings be canceled.

You can no longer kid around with a friend or laugh at a comedian because it might be deemed sexist, racist, or any other number of things.

Quite frankly, cancel culture is just sucking the fun right out of life.