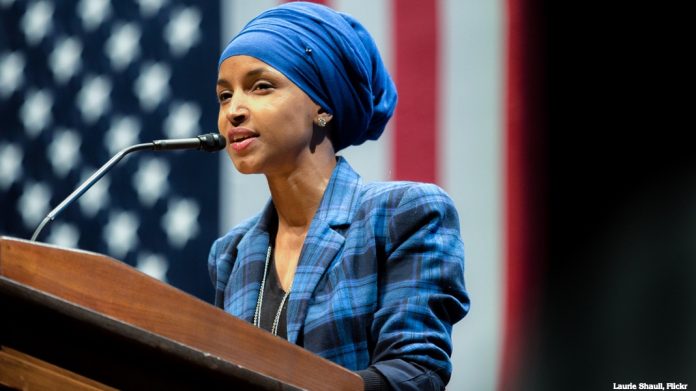 Ilhan Omar was thrust into the national spotlight when she became one of the first Muslim women elected to Congress.

Her short tenure has been plagued with controversy with her anti-Semitic remarks and harsh anti-Trump rhetoric.

But what Ilhan Omar called the 9/11 hijackers will leave you stunned.

Rep. Omar was delivering the keynote speech at a Council on American-Islamic Relations (CAIR) fundraiser in late March.

She urged Muslim Americans to “make people uncomfortable,” and that they are sure to “raise hell.”

Omar went on to claim that not only was CAIR created after 9/11 in response to protect Muslims’ civil liberties, but she described the 9/11 attacks in a peculiar way that truly left people shocked.

“CAIR was founded after 9/11 because they recognized that some people did something, and that all of us were starting to lose access to our civil liberties.”

But that’s far from the truth.

CAIR was founded in 1994 by Muslim Brotherhood operatives that were loyal to the Hamas terrorist organization that currently rules the Gaza Strip.

Many CAIR officials show time and time again they are supportive of jihadi groups.

Even after 9/11, CAIR continued its funding of Hamas despite their terror ties.

But what really stunned people is that she referred to the 9/11 hijackers as “some people” who “did something.”

Many jumped from skyscrapers because they couldn’t bear the heat and smoke caused by the planes that hit the World Trade Center.

It’s telling that Omar speaks softly about the 9/11 hijackers but routinely calls millions of Americans racist and suggests Trump supporters are “white nationalists.”

And Donald Trump Jr. even took her to task when she claimed Stephen Miller, one of President Trump’s longest and loyal staffers, was a white nationalist himself (he’s Jewish).

I see that the head of the Farrakhan Fan Club, @IlhanMN, took a short break from spewing her usual anti-semitic bigotry today to accuse a Jewish man of being a “white nationalist” because she apparently has no shame. https://t.co/y96IG8E7Y6

Do you think it’s dangerous to have a member of Congress who speaks more highly of the 9/11 hijackers than she does her fellow Americans, and even her own President?