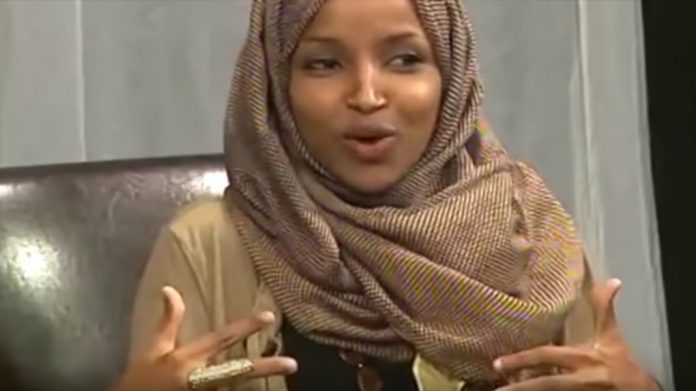 Rep. Ilhan Omar is the newest darling of the progressive movement.

She became one of two Muslim women to ever serve in the halls of Congress.

But what Omar just said about Jesus will leave you fuming.

Omar is known for her anti-Semitic views.

And her remarks even forced the Democratic leadership to pass a resolution condemning anti-Semitism.

But that hasn’t stopped her.

The New York Times ran a story claiming Jesus, who was born in Bethlehem, was most likely a Palestinian man with dark skin.

It prompted an American Muslim scholar, Omar Suleiman, to tweet “I was once asked by a relative who is a Palestinian Christian why the Christian right in America largely supports their oppression,” Suleiman wrote. “Don’t they know we’re Christian too? Do they even consider us human? Don’t they know Jesus was Palestinian?’“

Rep. Omar quickly retweeted Suleiman, in an apparent endorsement of the notion that Jesus was not Jewish.

Omar no doubt loved it when she saw The New York Times running a story claiming Jesus wasn’t Jewish. It was the perfect opportunity to play identity politics.

But the love soon flamed out.

The New York Times was forced to issue a correction, admitting Jesus was a Jew, born in Bethlehem.

Even though they claimed it was a “mistake,” the Left is hellbent on deploying their identity politics ploy in every facet of American life.

They’re determined to undermine every corner of Western civilization, and if they can’t undermine or destroy it, they’ll simply rewrite it into the narrative of their choice – like Jesus being Palestinian.

She called the 9/11 hijackers “some people” who “did something,” downplaying the significance of what happened when Islamic terrorists flew planes into the World Trade Center.

She’s even met with Turkish President Recep Tayyip Erdogan, one of the most radical Islamists in power who has ties to terror organizations like the Muslim Brotherhood and Hamas.

But none of that matters to Omar.

Instead, she sees America as a racist country run by old white men, and she’s determined to change that.

Do you think the mainstream media is trying to recreate history and purposely claiming that Jesus was a Palestinian?