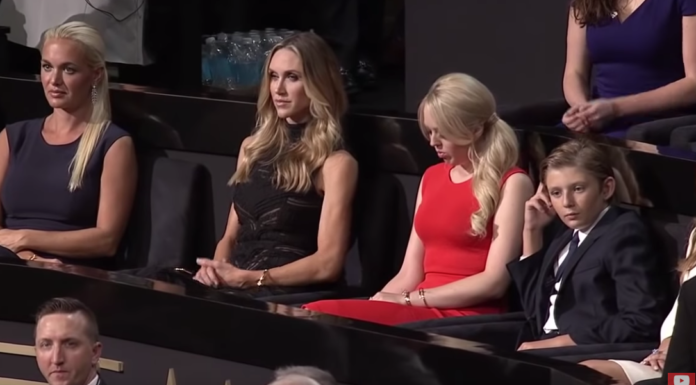 Radical Leftists in Hollywood are using all their power to try to take down President Trump.

There is no line they won’t cross to do that.

And what they just did to Trump’s 13-year-old son will make you sick to your stomach.

Recently, a Democrat witness in the impeachment hearings found herself in hot water for bringing up Barron Trump, the president’s 13-year-old son, in the hearing room.

She made a joke about his name, which infuriated many, including First Lady Melania Trump.

But now the Left is doubling down, and a Hollywood screenwriter released a script about Barron, which takes place in an alternate timeline where he is portrayed as a Left-wing hero and sabotage’s his father’s presidential campaign in 2016.

Screenwriter Nicolas Curcio is looking for someone to produce his unused script entitled Barron: A Tale of Love, Loss & Legacy in which the child tries to sabotage his father’s presidential ambitions in 2016.

According to an article posted on Monday by Matt Donnelly, a senior staff writer for the Variety website, Curcio’s screenplay has made the annual Black List, a ranking of Hollywood’s best unproduced scripts, which is conducted by surveying 250 top film executives.

Donnelly also stated that Trump’s son “could be coming to the big screen soon in a wild scripted ride that imagines him attempting to thwart his father’s campaign.”

Why would Trump’s child try to take down his Dad during that election? Donnelly states that “this fictional dilemma” depicts the boy as “fearing the devastating impact that his father’s presidency would have on his personal life, his country and the world at large.”

As you might expect, the project does not have any producers or financiers attached to it. Part of the eligibility for the list is that a script must not have commenced principal photography in the current calendar year.

It is well known that Barron Trump doesn’t like being in the public’s eye and just wants to have as normal a childhood as possible in his situation.

He’s been spotted hiding from reporters trying to snap photos of him on the White House lawn.

Despite this, the Left is insistent on dragging him into their attacks on the President whenever they can.

Do you think Hollywood should leave Barron Trump alone?