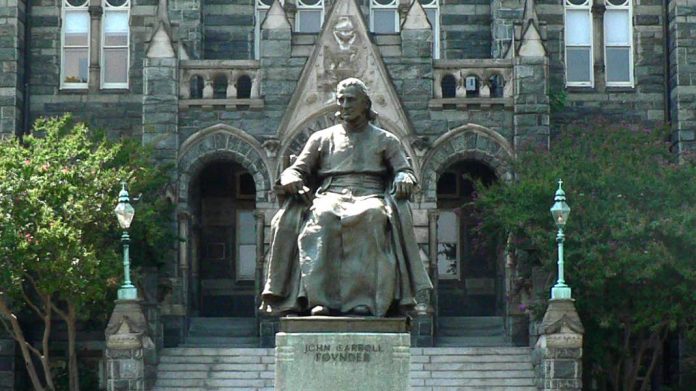 LGBT activists use college campuses to push their radical theories like an “infinite” number of genders.

And what happened to one Catholic student after he spoke out will make you see red.

John Carroll University is a Jesuit Catholic school in Ohio.

But parents sending their children to this school expecting them to learn about their faith are in for a big surprise.

John Carroll University hosted an annual “Drag Show” each of the past six years.

Declan Leary, a true Catholic student, spoke out against the drag show in his weekly school paper column.

But the school’s social justice warriors would have none of it.

They barraged the editor with letters describing Leary’s column as “dehumanizing” and “offensive.”

They called the article “hate speech.”

They even tried to prevent him from ever writing another column again.

Things got so out of hand that the Title IX coordinator hauled him in for questioning.

He ultimately was called before the school’s President.

The range of ‘acceptable’ discourse on college campuses is very narrow and it continues to shrink. School administrators reinforce this trend by sending both overt and discreet signals that their viewpoints are unwelcome.”

“Unfortunately, conservative students on campus receive a very clear message on a regular basis – not only are their political and religious views objectionable but are also bigoted and hateful. Rather than face the punishment-by-process indignity of disciplinary hearings, students choose to stay silent, self-censoring themselves out of an abundance of caution. In my mind, that chilling poses the greatest threat to free speech on campus today,” she added.

It even boasts about its “Gender Inclusive Restrooms.”

They’ve made it clear that they’d rather side with LGBT activists pushing their radical agenda than their own Catholic students who just want them to adhere to Church teachings.

Would you send your child to a self-proclaimed “Catholic” school that hosts drag shows and has “gender inclusive” bathrooms?