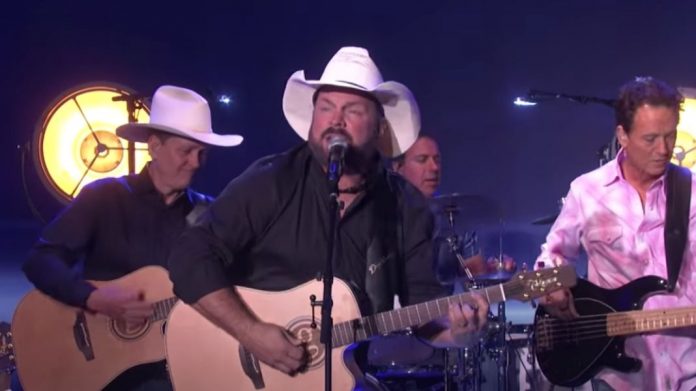 He is a country music and American legend. His career is full of hit songs, sold out stadium concerts, and amazing shows.

But Garth Brooks is also known for his kindness and a good old, all-American approach to his work.

And what Garth Brooks just did showed what it really means to be an American.

From his start in 1989, Garth Brooks took the country music world by storm.

His third album, Ropin’ the Wind, was the first country album to ever debut at number one on the Billboard 200.

Brooks is credited by many for single-handedly making country music cool to the general population.

He has sold more than 148 million albums, placing him just behind The Beatles, and just ahead of Elvis Presley.

And his song Friends in Low Places released in 1990 on his album No Fences, has become both a barroom and buddy anthem around the world.

He’s won more awards than any other country musician in history and even took a short-lived foray into the world of rock music.

It is not an overstatement to say Garth Brooks may be the most important and influential artist in country music history.

Now, after winning CMA entertainer of the year a record seven times, Garth Brooks has announced that he wants his name to be permanently out of contention for the prestigious award.

“It’s time for somebody else to hold that award,” Brooks, 58, said during a virtual press conference.

Indeed, his victory was anything but fun for the country music icon.

His victory came as a surprise to most industry insiders and created a firestorm on social media, especially among Carrie Underwood’s fans, who believed she was the clear winner.

Especially given that the entire night of awards last year was dedicated to celebrating the accomplishments of women in country music.

It seems many of her fans just assumed it would “rightfully” go to a woman. But country music is one of the last refuges of actual American values left.

In other words, not everyone gets a participation trophy, and no one wins based on anything other than merit.

But, in addition to Underwood’s fans, some of Eric Church’s hardcore fans were also ticked off.

They believed Church, the newer generation’s, country superstar was long overdue for the CMA’s highest honor.

Even Brooks himself thought Underwood would win, saying “I’m expecting to give a standing ovation to Carrie,” he said. “I mean, this is her night . . . And when they said my name, then I was like, I’m lost here because I don’t know what to say.”

As he dealt with the backlash after the November awards show, Brooks said, he couldn’t shake the idea that it was time to step aside and leave the entertainer of the year award for the next generation.

This is exactly the kind of sentiment that used to run America.  Grace, honor, duty, hard work and actual courtesy.

By the end of the year, Brooks said, he was trying to convince CMA staff to “establish some kind of ‘entertainer of the year emeritus’ kind of thing.” He said he was told that “the CMAs can’t just create a title and give it to somebody — because they want to treat every artist fairly. I totally get it.”

That’s when he said he realized his only logical way forward was to take his name out of the running permanently.

But the CMA execs had other ideas, “The long-standing CMA Awards rules do not allow individuals to remove themselves from the balloting process at any point,” according to a statement released Wednesday by the Country Music Association.

So that means it’s possible Brooks could advance to the finalist list and even win again this year.

All that aside, Garth Brooks exemplifies the kind of American we need today, rather than the ‘Karens’ and radical socialists who just tear everything down, Garth Brooks and those like him are working to build others up.