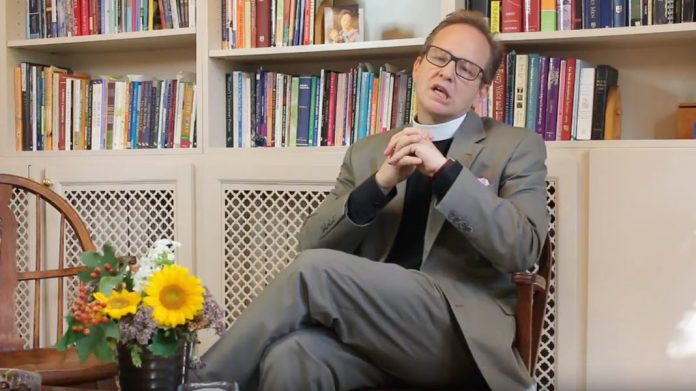 LGBT activists are working overtime to infiltrate every institution they can, including churches.

There are even some major religious figures who are openly gay.

And what a gay “Bishop” said about God will infuriate every Christian in America.

Rev. Thomas Brown, who is married to a man, was recently ordained as a “Bishop” in the Maine diocese of the Episcopal Church.

And while the fact he is a gay man serving as a “Bishop” is infuriating enough for most Christians, he is already trying to change church doctrine.

After being ordained, he was heard referring to God as “she” twice while reading the Nicene Creed.

The Nicene Creed was written over 1,600 years ago, and specifically refers to God as a man, like all other important church documents.

Rev. Thomas Brown, who is married to a fellow priest, was ordained as a bishop of the diocese of Maine in the Episcopal Church June 22. Immediately following his ordination, Brown referred to God as a “she” twice in the Nicene Creed.

“She is worshipped and glorified. She has spoken through the Prophets,” the just-ordained Bishop Brown said, referring to the Holy Spirit.

The Nicene Creed was written 1,638 years ago and only uses masculine pronouns to refer to God.

The microphones in the Cathedral of St. Luke projected the voice of the celebrant, Bishop Curry, for the duration of the creed, barring the line where Bishop Brown used female pronouns for God. It is unclear if the microphones were intentionally switched to project Bishop Brown’s female-gendering of God.

Deacon Todd Thomas of the Episcopal Diocese of Washington told the Daily Caller that he has never heard an Episcopal priest use female pronouns in the creed. Individual bishops and priests can, however, change words and phrases in the Nicene Creed, Deacon Thomas explained. He cautioned any changes to the creed should be done “in conversation” with the lay people.

Not only is Rev. Brown insulting Christians by being in a gay marriage while serving in a high-ranking church position . . .

He is also trying to change the perception that God ordained for himself in presenting His son Jesus christ as a man.

For centuries, God has been referred to with masculine pronouns, and there have been no problems.

Do you think it is appropriate to refer to God as a “she”?