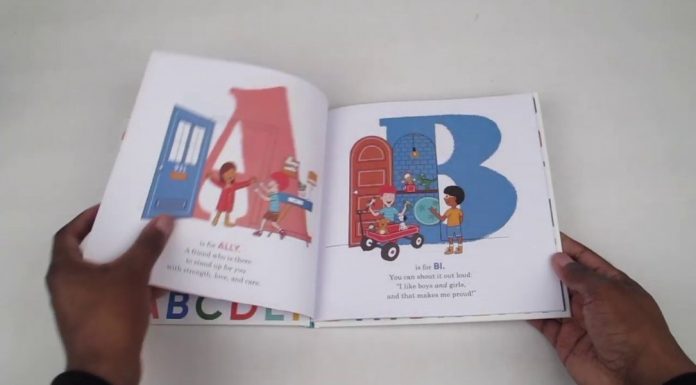 The radical Left continues to push the envelope on the forced indoctrination of America’s children.

They are slipping their absurd and dangerous propaganda into classrooms across America and many parents are even teaching it in their homes.

And you won’t believe how the radical Left want your children reading the ABCs.

Recently, a video went viral that showed a child – a preschooler, actually – reading a book called The GayBCs.

Me: The LGBT Left is brainwashing children

The Left: That’s a homophobic lie!!

The Left has gone so far that they are now teaching preschoolers the meaning of terms like “bi,” “intersex,” “queer,” and “trans.”

Because every three-year-old needs to know those things, right?

According to some online writeups The GayBCs is a “unique” book that uses the alphabet to explain all about the “basics of LGBTQ+.”

The GayBCs was written by Matt Webb, a gay graphic designer by day, and writer of children’s books by night.

The author says that he learned of his gender identity and sexual orientation at the age of 5.

He said he was in a karate class in his hometown of McMinnville, Tennessee when he figured out that he was different from his brothers.

Webb is apparently trying to teach children between the ages of four and eight proper LGBT vocabulary and give them opportunities to “discuss identity with their loved ones.”

The radical leftists are once again targeting the most vulnerable and easily influenced in society – children.

They want children – and adults, but children are easier to sway – to believe that these “identities” are perfectly normal and that we should be embracing them.

Lindsay Amer of the YouTube channel Queer Kid Stuff, which provides educational LGBT videos for all ages thinks the book should be in families’ libraries.

Radical leftists will stop at nothing to prey on children and America needs to stop sitting back and letting it happen.