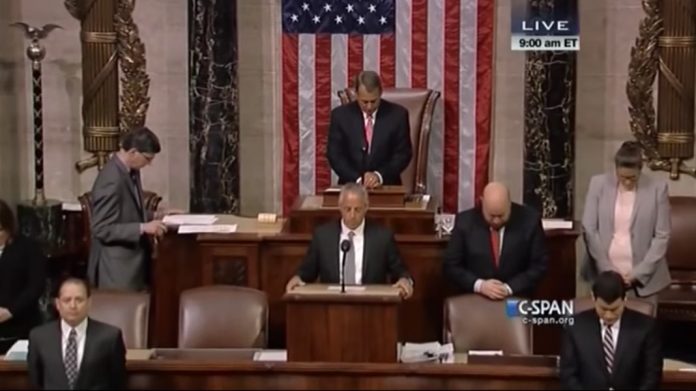 Atheists cry they want “separation of church and state.”

But what they really want is to force their idea of secularism on everyone.

And one atheist group is now suing Congress for the most ridiculous reason.

The Freedom From Religion Foundation (FFRF) is at it again.

This time FFRF is suing Congress because they want atheists to open Congress with an invocation instead of a prayer by an ordained Chaplain or minister.

A federal court heard an appeal Thursday in a case involving an atheist group that wants congressional invocations opened up to those who don’t believe in God.
…
Dan Barker, co-president of the Freedom From Religion Foundation, was invited in 2015 by his representative, Democrat Mark Pocan, to deliver an invocation but was prevented from doing so by House Chaplain Patrick Conroy. Conroy’s office said all guest chaplains must be ordained by a “recognized body in the faith in which he/she practices” and must have an ordination certificate.

The Freedom From Religion Foundation sued, arguing that congressional policy violates the First Amendment’s Establishment Clause. After FFRF lost last year, it appealed to the D.C. Circuit Court of Appeals.

The tradition of federal legislative prayer dates all the way back to the First Continental Congress in 1774.

In fact, House rules require Congress to be opened each legislative day with a prayer.

In the first ruling, the federal court ruled that Congress has the right to invite whomever they please, regardless of religious background.

Lately FFRF has been particularly aggressive in trying to impose their secularism on society.

As we’ve reported, FFRF attacked a high-school for praying for a sick girl before a football game.

On top of that, they also threatened lawsuits against a school that had a prayer before their graduation ceremony.

So this is nothing new for FFRF and their band of radical atheists.

They’re out to eliminate any public display of Christianity.

Do you think Congress should invite atheists to “pray” before in lieu of ordained Chaplains or ministers?