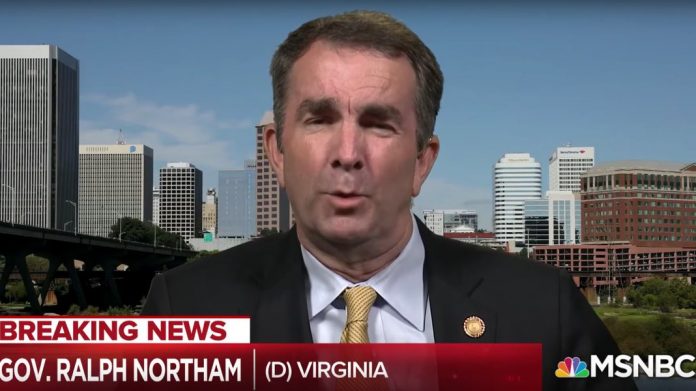 Since being exposed as a racist, Virginia Governor Ralph Northam has been doing everything to appease the radical Left.

He has pushed all of their insane agenda items to desperately prove he isn’t racist.

But now he is fuming after a judge shut down his plan to prove he’s not racist.

Northam’s career will never be the same after his Medical School yearbook photos were released, showing him either wearing blackface, or Ku Klux Klan robes.

Many thought it would be the end of his political career, and it may force him out of office for good when his term is up.

That’s why Northam is desperately trying to score points with the radical Left.

To do that, he has launched a crusade against Confederate monuments around Virginia.

Perhaps the most significant of these is the statue to Robert E. Lee in Richmond, which has been in place since the late 1800s.

While many statues have been ripped down, this one’s massive size has made it difficult for rioters, considering the statue itself weighs in at 12-tons and sits on a 50-foot base.

It has been ordered to be removed.

But in a shocking twist, just before it was to be removed, a Judge a stay on Northam’s order for at least 10-days so a lawsuit can be heard.

His lawyer Joseph E. Blackburn Jr., argued in a court filing that the state “guaranteed” to “hold said statue and pedestal and circle of ground perpetually sacred to the monumental purpose” and “faithfully guard it and affectionately protect it.”

This will give his lawsuit the chance to possibly protect the statue forever.

The Left is furious at the news, and are continuing attempts to remove the statue claiming that it is racist.

In reality, neither side of the Civil War was without their faults.

And it was a war between brothers that caused massive bloodshed on both sides that ideally would have never happened.

But removing statues relating to the major historical event does nothing but cause division, which is being proven time and time again.

Thankfully, this judge seemingly agrees, and is at least delaying its removal.

These ten days could be used to craft further plans to shut down this despicable act of historical destruction.

Do you oppose removing Confederate monuments?