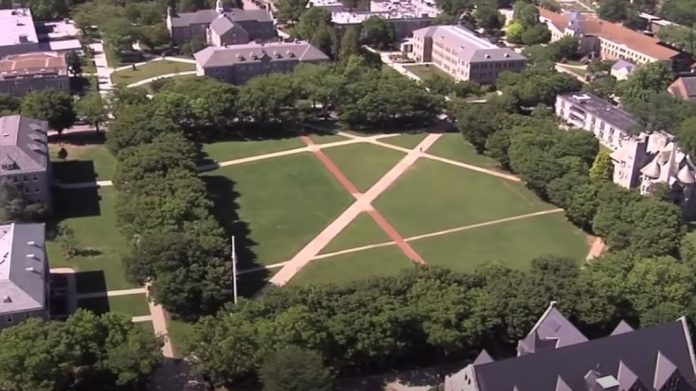 College campuses have been completely overtaken by far-left professors and administrators.

The echo chamber in universities has led to left-wing views becoming more and more extreme over time.

University of Rhode Island professor Erik Loomis made a case for why public universities should be defunded until the intellectual rot is cleaned out.

Recently, federal agents killed Antifa terrorist Michael Reinoehl in a shootout after he executed a Donald Trump supporter in cold blood in Portland.

On Loomis’s blog, he defended the murderer’s actions and said, “[Reinoehl] killed a fascist. I see nothing wrong with it, at least from a moral perspective.”

This is beyond the pale, but sadly, this type of rhetoric isn’t even all that shocking on college campuses.

This is the result of decades of Marxist indoctrination on college campuses that has come completely unchecked.

He first said he was defending one of his “friends of color,” but surveillance footage of the area showed an organized hit, not an instance of self defense.

Even far-left Portland District Attorney Mike Schimdt, who admitted to be old buddies with a left-left Portland activist, said Reinoehl intended to commit a premeditated attack.

Communists like Loomis portray all of their ideological opponents as fascists, which they believe gives them the moral authority to use violence even when unprovoked.

These are the same people who declare speech as violence, but premeditated murdered is self-defense.

This is the worldview of a broken mind, and this has become a dominant ideology on college campuses.

The University of Rhode Island made news a few years ago when students relentlessly disrupted a speech from classical liberal YouTube host Dave Rubin.

The rot on college campuses has spread at an alarming rate.

The hard sciences aren’t even immune to this sickness.

Leftist academics even argued on Twitter that the math equation 2+2=4 “reeks of white supremacist patriarchy.”

The radicals on the Left have turned “Orwellian” into a cliché with their escalating madness, and the remaining sensible liberals are having little effect at stopping them.