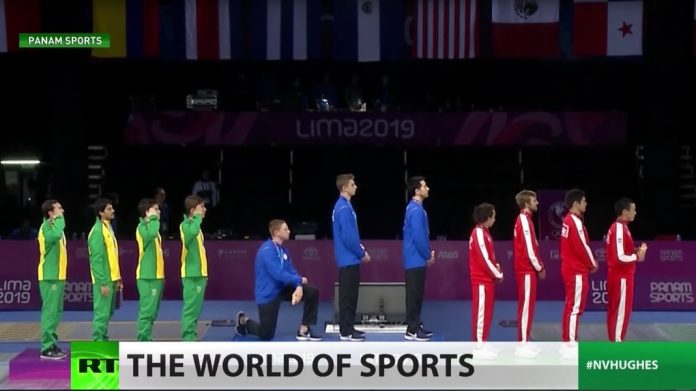 Ever since Colin Kaepernick did it, radical Left-wing athletes have been kneeling during the national anthem to demonstrate how “woke” they are.

But now they are starting to pay the consequences.

And this U.S. Olympic athlete took a knee during the national anthem and his career could be going down in flames.

But as time went on, it became evident that Kaepernick just took a knee because he despises America.

Thanks to him, kneeling during the anthem is a popular trend among Left-wing activists on the field.

In this case, these two Olympic athletes are now paying big time for taking a knee.

After they took a knee, the Olympic Committee put the two under probation for the tasteless protest.

The head of the United States Olympic and Paralympic Committee has put fencer Race Imboden and hammer thrower Gwen Berry on probation for their political protests at the Pan-American Games.

The letters of reprimand, sent Tuesday, chastise Imboden for kneeling and Berry for making a defiant fist during the playing of the national anthem during medal ceremonies, the Associated Press reported Wednesday.

Although the two are still eligible to compete at the Tokyo 2020 Olympics, the reprimand suggests that continued political protests by the two or other U.S. athletes will not be tolerated.

“It is also important for me to point out that, going forward, issuing a reprimand to other athletes in a similar instance is insufficient,” wrote Chief Executive of the United States Olympic and Paralympic Committee, Sarah Hirshland.

These athletes never thought they would be punished for protesting the national anthem while playing for the U.S. in the Olympics.

The audacity to kneel during the national anthem while representing the United States on the world stage is absurd.

These athletes should be honored to play for the United States.

Instead, they are squandering the opportunity in order to score a few points with radical Leftists.

Should athletes be put on probation when they kneel during the national anthem? Or even fired from the team?