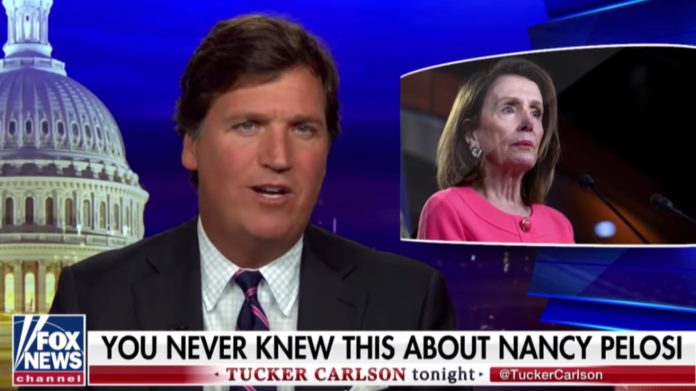 Nancy Pelosi loves to tout her Catholic faith while ignoring what the Church actually teaches in practice.

Many see her as nothing more than a total hypocrite.

And Tucker Carlson just humiliated Pelosi over this outlandish claim.

In a recent episode of Tucker Carlson Tonight, the conservative host called out Nancy Pelosi for stating that prayer has guided her push for impeaching President Trump.

He mocked her for her statement, sarcastically calling her a “person of deep faith” as a “member of the church of partial-birth abortion.”

Hearings are currently underway over Trump’s request to the Ukrainian government that it investigate whether former Vice President Joe Biden pressured the Ukrainian government to fire a prosecutor that had been investigating his son Hunter’s business dealings in the country. Democrats claim that Trump tried to withhold military aid in exchange for damaging information on a potential political opponent; the president’s defenders argue he engaged in routine negotiating in pursuit of a valid question.

Pelosi has repeatedly invoked prayer throughout the process, insisting Democrats have only moved against Trump after deep reflection and even reluctance. Carlson mocked her rhetoric during a Wednesday interview with Rep. Brad Wenstrup (R-OH).

Carlson played a clip of Pelosi claiming she was “very prayerful, thoughtful, and actually sad today” over the supposed need for impeachment hearings. “Obviously a person of deep faith, a member of the church of partial-birth abortion, praying deeply,” he reacted sarcastically. “What do you make of that, her repeated professions of faith?”

Many priests in the Catholic Church believe that those who support abortion should be denied Holy Communion at church.

Recently, Joe Biden was denied it at a church in South Carolina, with the priest citing his support for abortion.

Do you think Nancy Pelosi should be denied communion?