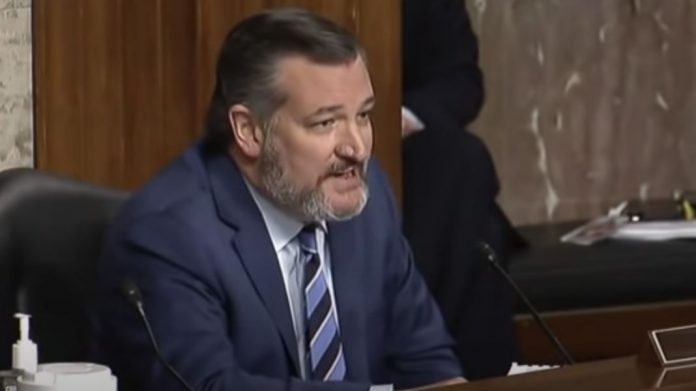 Ted Cruz had some explaining to do in a recent interview.

The Republican Party has lacked a clear leader in Washington, D. C. since Trump left the Oval Office.

The country faces a living hell thanks to the Left and needs unwavering America-loving leaders to get us out of this mess.

But to many, Ted Cruz went from first to last for leading the conservative cause in Washington, D.C. after he called some Trump supporters American “terrorists” in a major misstep.

Senator Ted Cruz has tried to get out front of conservative issues ranging from immigration to constitutional matters.

Sen. Ted Cruz @tedcruz to Mayorkas:
"Has any Democratic member of this committee given a damn enough to see the children being locked up by Joe Biden and Kamala Harris because of your failed immigration policies?" pic.twitter.com/Z1RSX5Ehuc

But in either a slip of the tongue or a lapse of judgement, Ted Cruz turned his sights on Middle America this past week.

He took the Left’s narrative hook, line, and sinker about the events on January 6th.

Video of @tedcruz today that the Jan 6th mass trespassing event violently cracked down by police was a “violent terrorist attack on the capitol.”

The game is over, folks.

Go home and get a life.

You are wasting your time with the GOP. pic.twitter.com/0iU4p16ItE

Thankfully Ted hasn’t been let off the hook for his classification of the events as a terrorist attack.

It’s an issue because when something is a terrorist attack it requires harsh and swift action against those acting who are terrorists.

And the Left has been using that train of thought to justify attacking hard-working Americans for a year now for just showing up in Washington, D.C. on January 6th.

Cruz went on Tucker Carlson’s show to claim that his comments were “sloppy.”

Cruz could have said he was referring to likely FBI and likely “informant” and instigator Ray Epps as Carlson alluded to in the interview.

After all that would meet the actual definition of terrorist.

The Capitol Police refuses to release all the J6 video and the DOJ knows if Ray Epps or anyone else instigating events last January was on their payroll.

Congress needs to show both that they were creations of Congress and can be dismantled by Congress too if they continue their stonewalling.

A congressional Republican who would lead charge, instead of just throwing their hands up, is a true Conservative leader.

Ted Cruz should consider that course if he wants to redeem himself.