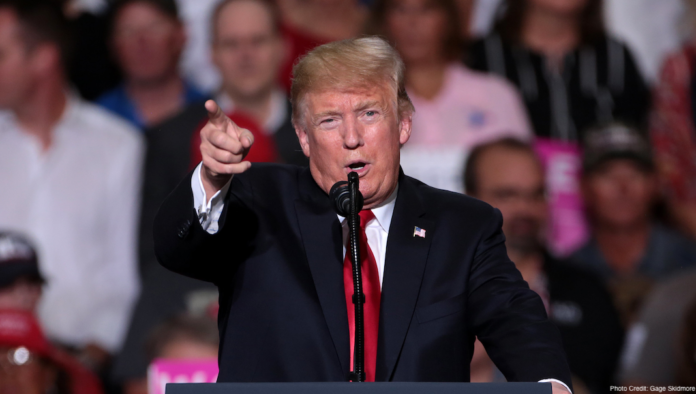 President Donald Trump has proven himself as a major champion for Christians in America.

After eight years of Barack Obama he truly is a welcomed break from the anti-Christian bullying of the Democrat Party.

And his latest move has every Christian in America cheering.

The annual March for Life took place in Washington, D.C. this week.

And despite it running for 47 years, no President ever spoke at the march in person.

But Trump just changed that when he spoke on stage during the main event this year.

“We are deeply honored to welcome President Trump to the 47th annual March for Life,” said Jeanne Mancini, March for Life president when the news broke he’d be attending. “He will be the first president in history to attend and we are so excited for him to experience in person how passionate our marchers are about life and protecting the unborn.”

Trump responded to the news, with a simple Tweet stating, “See you on Friday…Big Crowd!”

March for Life is the biggest pro-life rally in the country.

Last year’s event brought an estimated 75,000 people, and this year initial reports estimated attendance around 100,000 for the event.

Not only this, but Trump gave pro-life Americans another huge win by declaring January 22 ­– the anniversary of the Roe v. Wade decision – National Sanctity of Life Day.

Roe v. Wade is what ultimately made abortion considered a right.

Decades after the decision, Norma McCorvey, who was “Roe” in Supreme Court case, came out and declared that her role in the case was the biggest mistake of her life.

Despite that, liberals continue to tout the anniversary as a day of celebration.

That’s why Trump is taking it back, and reaffirming his support for the sanctity of life.

In his declaration, he stated:

“Every person — the born and unborn, the poor, the downcast, the disabled, the infirm, and the elderly — has inherent value. Although each journey is different, no life is without worth or is inconsequential; the rights of all people must be defended. On National Sanctity of Human Life Day, our Nation proudly and strongly reaffirms our commitment to protect the precious gift of life at every stage, from conception to natural death.”

And Trump isn’t just pandering for support; he has been working to actually create the framework to reverse Roe v. Wade, which will make it possible for abortion to be made illegal in states across the country.

Supreme Court Justice Clarence Thomas recently hinted at the possibility of this, stating that the court should revisit “demonstrably erroneous decisions” while discussing an abortion-related case.

Do you think Roe v. Wade should be reversed?