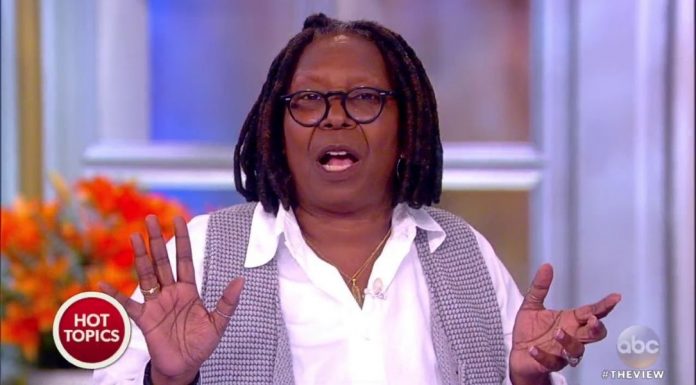 With the 2020 elections over, leftists are looking for a new target to attack.

The new target in their crosshairs seems to be Trump supporters.

And now Trump supporters are furious as Whoopie Goldberg viciously attacked them while on The View.

With the election ending last week, leftists and the Fake News Media don’t know what to do with themselves.

For the past four years, they have viciously attacked President Trump for standing up for the hard-working Americans.

Now, with President Trump’s re-election chances in doubt, those same hard-working Americans are in their sights.

Leftists and the Fake News Media are eager to attack.

And that is exactly what happened on The View.

Co-host of The View, Whoopi Goldberg had a message for everyone in America that doesn’t believe that Joe Biden won the election.

She claimed, “I want to say to all those people who don’t believe that Americans actually got out and voted. Let me say this to you. When you-know-who was elected four years ago, Hillary Clinton didn’t say, ‘Hey wait a minute, this doesn’t feel right. Stop the count.’  She didn’t say any of that, so all of you, suck it up! Suck it up like we sucked it up.”

Whoopie continued, “If you’re not sure you’re comfortable with Joe Biden, do what we did. Find things and then take it to the law. If the law says it’s something to look at, look at it, but from now on, suck it up.  Grow the pair for [Trump] that he can’t grow for himself because this is ridiculous. You’re not sure that he won? You’re bringing into question all these Americans who voted legally, came out and stood and voted. How dare you question it?”

You can watch the full rant by Whoopie Goldberg below:

Whoopie seems to ignore the years of Hillary Clinton and other leftists blaming so-called Russian collusion and misinformation as the reason why Donald Trump won in 2016.