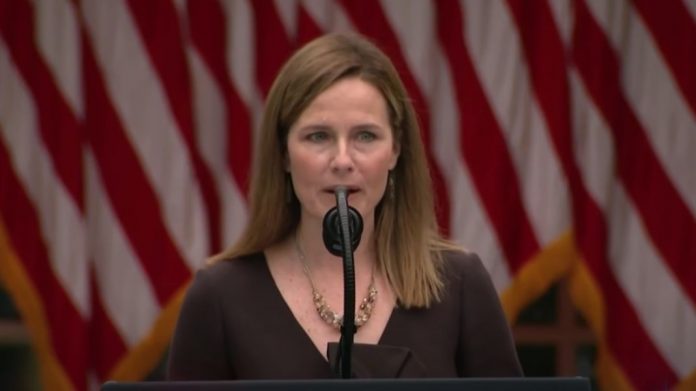 The nomination of Amy Coney Barrett to the Supreme Court is the biggest win for Catholics in many years.

The devout Catholic has a flawless record on pro-life, and pro-family issues, which is why the Left hates her so much.

But Trump just destroyed every anti-Catholic attack on her with one sentence.

The rise of the Black Lives Matter movement has inspired an extreme uptick in anti-Catholic bigotry.

Black Lives Matter leaders like Shaun King have called for acts of vandalism on white depictions of Jesus.

And extremists have followed through, launching dozens of attacks on Churches across the country, with the majority being Catholic churches.

So needless to say, Catholics have been looking for some good news.

Barrett’s nomination finally brings them the news they’ve been waiting for.

But it has also inspired hate from the Left, who have claimed that she will not be able to fulfill her duties with her faith.

They have even attacked her for having a large family.

President Trump fired back at these attacks, making clear that her faith shouldn’t be a target for attack in a country that is built on religious liberty.

“We have noticed some comments in the media about my incredibly qualified nominee, Amy. The New York Times said her religion is not consistent with American values,” Trump said. “She’s Catholic. That covers a lot of people. That’s a very disgraceful thing to say.”

Trump then destroyed all their attacks, simply pointing out that he thought “we settled this 60 years ago with the election of John F. Kennedy,” who was the first Catholic president, despite attacks on his faith alleging he would take orders from the Pope.

“But seriously, they’re going after her Catholicism. I will stand with her, fight with her, and we will make sure that these attacks stop because . . . it’s unprecedented. They’re basically fighting a major religion in our country. It’s just incredible,” Trump said.

This is the sort of bravery Americans have come to expect from President Trump.

He is willing to stand up for Americans that the Fake News Media have made into punching bags for their radical agenda.

Barrett has previously faced attacks for her Catholicism.

During her appeals court confirmation in 2017, Sen. Dianne Feinstein alleged that “when you read your speeches, the conclusion one draws is that the dogma lives loudly within you,” adding that “that’s of concern when you come to big issues that large numbers of people have fought for, for years in this country.”

These attacks will certainly come up again during her confirmation hearings.