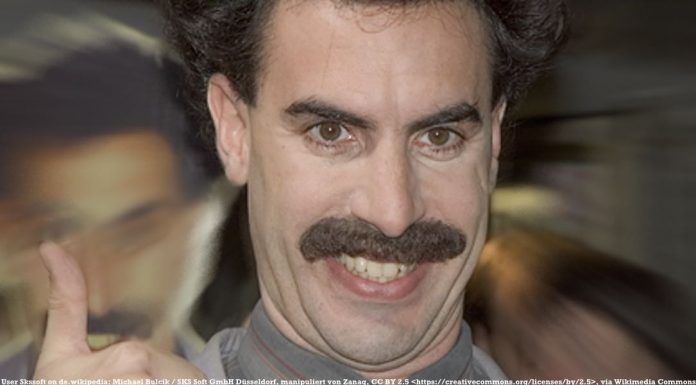 Leftists are patting themselves on the back now that Donald Trump is out of office.

Now one Trump-deranged actor told the truth about his latest project.

Sacha Baron Cohen has become increasingly political over the past few years.

Now Cohen is doing a victory lap and taking partial credit for getting Joe Biden elected.

Cohen said his Borat sequel was intentionally made and released to attack Trump.

He said in an interview:

“The aim of the movie is to deliver a message. That’s the reason why Borat came out when it did . . . I thought the thing I can do to warn people is to use my funniest character, my most popular ­character, to show what I thought the dangers of ­voting for Trump were. I felt democracy was at a very dangerous point.”

It’s ironic that Cohen is concerned about democracy when he’s calling for censorship and the dissemination of information.

Cohen and other leftists’ views on free speech are myopic at best, and authoritarian at worst.

Some intellectually consistent progressives have spoken out against the dangers of nuking the President of the United States from every single social media platform and colluding to deep-six Twitter competitor Parler.

Cohen has unwittingly – or perhaps consciously – played a hand in a fascist left-wing power play.

The corporate press and the Big Tech oligarchs have essentially merged with the state now that the Democrats are in power.

Entertainment plays a part, too, by serving as a propaganda arm.

It had nothing to do with his film and more to do with the corporate press burying negative Biden stories.

A study by the Media Research Center showed that 17% of voters in swing states would not have chosen Biden had they known about the stories that were suppressed, such as Hunter Biden’s “laptop from hell.”

The Democrats’ likely unconstitutional switch to universal mail-in voting, a system prominent Democrats warned against in the past, also played more of a role in Biden’s win than Cohen’s tired shtick.

Nevertheless, Cohen and other celebrities will continue to exaggerate their importance.