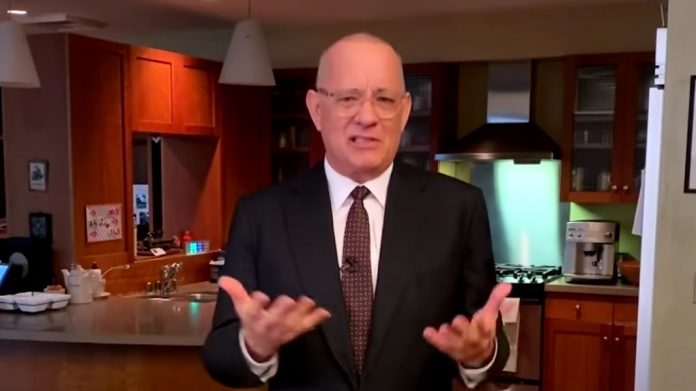 Despite this, the Left is demanding everybody wear a mask all the time.

And Tom Hanks just attacked everyone who isn’t wearing a mask with one sick word.

If there is one thing Hollywood celebrities love to do more than anything, it is to shame everyday American citizens.

From their ivory towers, these Hollywood elites spend their days lecturing Americans living in experiences they have never known.

So it’s no surprise that Tom Hanks took time to attack Americans who aren’t wearing masks in response to coronavirus.

And at the end, he said that you are a “pussy” if you don’t wear a mask.

“Those things are so simple, so easy, if anybody cannot find it in themselves to practice those three very basic things — I just think shame on you,” Hanks said. “Don’t be a pussy, get on with it, do your part. It’s very basic. If you’re driving a car, you don’t go too fast, you use your turn signal and you avoid hitting pedestrians. My Lord, it’s common sense.”

“There’s really only three things we can do in order to get to tomorrow: Wear a mask, social distance, wash our hands,” Hanks continued.

This is a trend among celebrities at the moment.

They are all putting out videos shaming Americans about masks.

This is because it is the current trend.

Before this, the trend was putting out videos to shame white people, in support of Black Lives Matter.

Naturally, Hanks hops onto all these trends.

It has long been known that Hanks is a liberal.

The goal of that organization is to turn out more left-wing voters so they can defeat President Trump.

Hanks has hated Trump for many years.

Before the 2016 election, he declared that Americans would never elect “a simplistic, self-involved gasbag” like Trump.

Hanks is far from the only liberal in Hollywood.

Joe Biden recently attended a virtual Hollywood fundraiser where he raised $6 million for his campaign.

The fundraiser was reportedly based entirely around bashing President Trump, with Joe Biden saying very little about what he believes in.

Do you think Hollywood is too liberal?