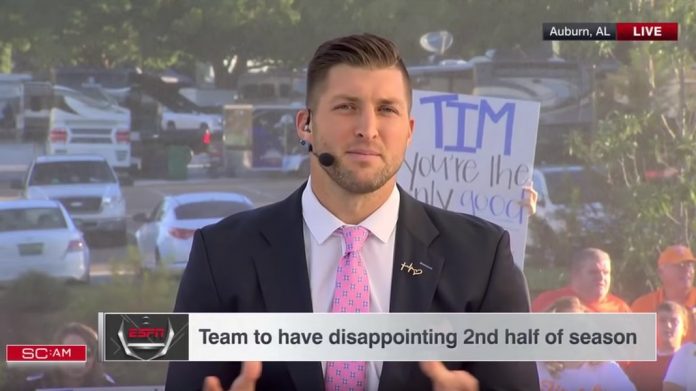 Ever since Tim Tebow praised Jesus on the football field for all of the country to see, the Left and mainstream media have ruthlessly attacked him.

But rather than caving to their pressure, Tebow has doubled-down and publicly shares his faith to spread the Gospel.

And recently Tebow made a surprise visit to a prison to share the word of Jesus with inmates and you’ll never guess what happened next.

When the former football player made his faith known on the national stage, everyone predicted his career would go up in flames.

Since then, Tebow has played for several big name football and baseball teams and is now a highly-paid football analyst on ESPN.

Not only is his career soaring, he continues to share his faith with others despite how much the media and the Left attack him for it.

This time, Tebow decided to speak with 2,000 inmates at the Alfred Hughes maximum-security prison, and what happened will make you laugh.

After sharing the Gospel, an inmate challenged him to a push-up contest and narrowly beat him 84-71!

ESPN football analyst Tim Tebow was in Waco, Texas, where he made a surprise visit to the Alfred D. Hughes maximum-security prison on Thursday.

“So encouraged by what God is doing at Alfred Hughes prison and grateful for the time spent with my new brothers in Christ today!” the outspoken Christian wrote on Instagram.

Alfred D. Hughes maximum-security prison holds over 2,000 inmates and Tebow met with a group of them there where he shared the Gospel and even took part in a pushups contest that he lost. TMZ reported that he was defeated 84-71 in the pushup competition.

“Excited to see how they will use their lives for the Kingdom as they grow closer to God and encourage others to live in faith,” he shared.

The Florida Gators Heisman Trophy winner thanked the warden and the entire staff for opening their doors to him.

Tebow accepted his defeat graciously and continued to talk with the inmates about their faith.

It is extremely rare for such a public figure to be so open about his or her Christian faith.

The Left has done everything in their power to demonize Christians and remove them from the mainstream.

Fortunately, brave men such as Tim Tebow continue to spread the message.

Should more Christian celebrities speak up about their faith like Tim Tebow does?