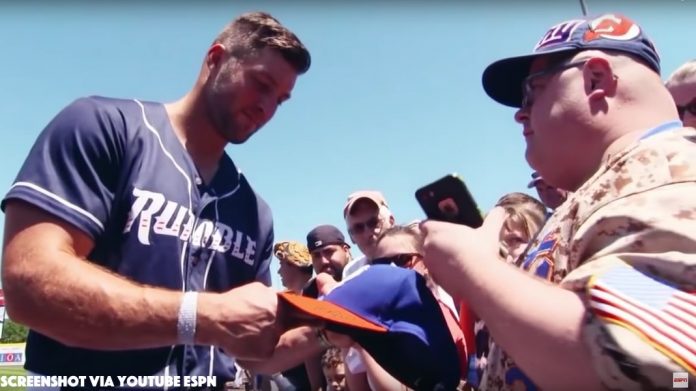 After leaving the NFL behind, Tebow made the switch to baseball.

And he’s been making a name for himself in the minor leagues ever since.

Now Tebow just got the news he was waiting for from the beginning.

This would be a significant promotion from their Triple-A team he is expected to start for in 2019.

When the New York Mets open the 2019 season in March, it’s entirely possible that Tim Tebow will be on the Major League roster.

The expectation is that Tebow will open the year with Triple-A Syracuse. But speaking on the matter, new GM Brodie Van Wagenen said that Tebow might be with the Major League club.

Tim Tebow is likely to begin 2019 at Triple-A, but new #Mets GM Brodie Van Wagenen did not rule out the possibility that he could make the @MLB Opening Day roster. Tebow has fully healed from hamate injury, Van Wagenen said. @MLBNetwork

Tebow has been making his rounds in the minor leagues jumping from Single-A to Advanced-A in 2017, and eventually to Double-A in 2018.

While experts say that it’s a longshot to see Tebow suiting up for the MLB Opening Day, rumor has it that several people in the Mets organization think it will happen.

As usual, he is sure to credit his Lord and Savior Jesus Christ for all the success he has in anything he does.

But his commitment to excellence unto Christ is something that is rare in the professional sports world, and it has certainly catapulted him to success.

And his focus on Christian beliefs, and family values is what is particularly inspiring in comparison to the antics of the NFL’s social justice warriors like Colin Kaepernick.

Do you think Tebow should be given the chance to make the 2019 Opening Day roster for the Mets? Let us know in the comments below!