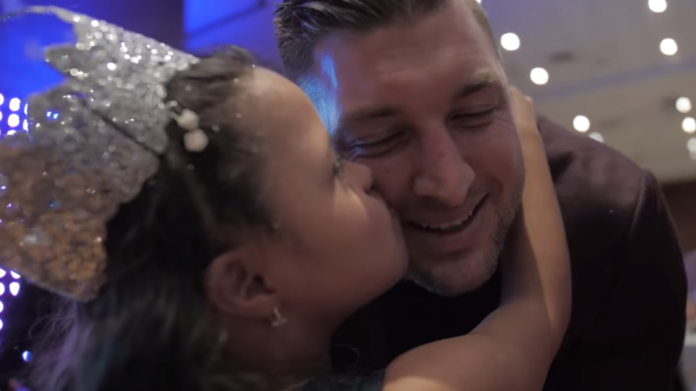 Tim Tebow is one of the few celebrities that is willing to share his faith and actually gives back to people and causes worth supporting.

But his recent act of generosity will leave you shocked.

Tebow did something incredible for the special needs community.  You will never imagine how he impacted their lives.

The former NFL player has been famously attacked by the mainstream media, politicians, and fellow athletes for sharing his faith and standing up for his beliefs.

At one point, he nearly lost his entire career due to sharing his faith and refusing to back down.

Fortunately, he’s gone on to find a successful career as both an athlete and sports commentator, and still openly shares his faith and does good works.

But the work he does with the special needs community will leave you stunned.

Each year, Tim Tebow’s foundation hosts “Night to Shine,” where the Tim Tebow Foundation hosts hundreds of prom nights across the United States for girls and boys ages 14 and up with special needs.

Many children and young adults never have the opportunity to attend their high school’s prom night and often feel left out or as if they are not accepted amongst their peers.

Tebow is committed to making each “Night to Shine” event a massive success each year.

“We have decided to go out of our way to make the biggest, the most special night of the year for people with special needs because they’re worth it and they’re special,” Tebow told Fox News.

The Tebow family continues to demonstrate the positive impact a celebrity can have on society if they choose to use their fame for the glory of God or the good of others.

Unfortunately, most celebrities are concerned with telling their followers on social media how “woke” they are.

Do you think Tim Tebow is a great role model for a celebrity?