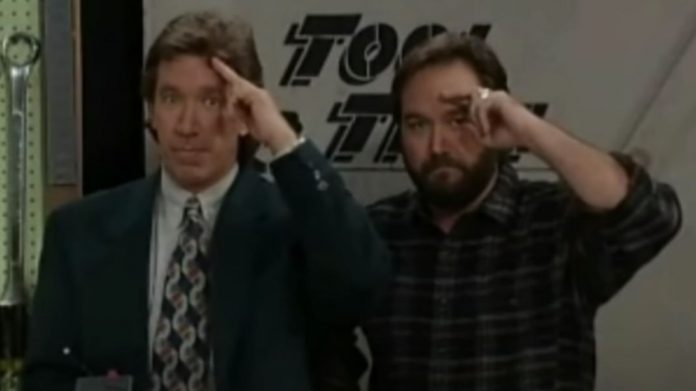 Tim Allen has been a target of the Left for years.

And recently, Disney made sure he paid the price for his conservative beliefs.

But he couldn’t hide his smirk after what this famous actress just said.

They hate anyone who believes in the same American moral values as you do.

That’s why Tim Allen became a target of the Hollywood elites.

Shows in Hollywood usually only get canceled if main characters leave the series or if their ratings suck on the show.

As long as the show or movie is making money it will continue with another season or sequel.

But that same standard doesn’t apply to Tim Allen.

Tim’s most recent hit show, Last Man Standing, was on the top of the charts every year but still got cut by Hollywood elites.

Damn I miss everyone on Last Man Standing, that was a great job. pic.twitter.com/Cht8mrO0v7

Saw the trailer for Buzz Lightyear and all I can say is Disney/Pixar made a HUGE mistake in not casting my pal @ofctimallen Tim Allen in the role that he originated, the role that he owns. Tim IS Buzz! Why would they completely castrate this iconic, beloved character?

The tide is turning. Hold the line. pic.twitter.com/sG5YNeMbMx

As for Allen, he knows fans love him.

And some networks still recognize it.

In fact, the History Channel has a new series hitting in just a couple of weeks called More Power that will feature Tim Allen along with his past co-star from Home Improvement Richard Karn.

The show will deep dive into the tools that build the world as we know it.