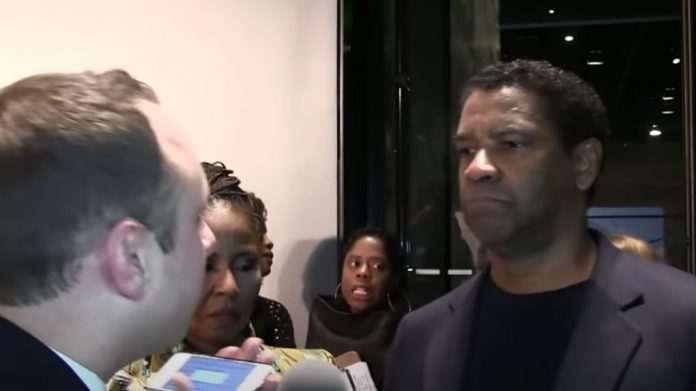 Secularists have been at war with religion in America for ages.

Religion has largely been stamped out of institutions controlled by the Left, particularly Hollywood.

But this top Hollywood actor just delivered a powerful Christian message for all to hear.

Denzel Washington is one of the best and most recognizable actors of his generation.

He’s starred in many iconic roles, and along the way he’s maintained a faith in God.

That is quite rare in an industry that’s often hostile toward religion.

During a recent interview, Washington recounted a profound experience in his life when he attended a church service in the 1980s.

He said, “I was filled with the Holy Ghost and it scared me. I said, ‘Wait a minute, I didn’t want to go this deep, I want to party . . .’ I went to church with Robert Townsend and when it came time to come down to the altar I said, ‘You know this time, I’m just going to go down there and give it up and see what happens.’ I went in the prayer room and gave it up and let go and experienced something I’ve never experienced in my life.”

Christians in Hollywood often hide their religiosity so as not to lose work, while others end up on the defensive when speaking about their faith.

Chris Pratt had to defend his church against smears from actress Ellen Page, who is gay, that the church does not allow LGBT people through its doors.

While other actors take every opportunity to cater to the left-wing mob, Washington takes an old school approach and is cagier about his politics.

After the 2016 election, a reporter impolitely asked Washington who he supported, and fired back, “None of your business.”

During a 2004 interview with Katie Couric, Washington rejected the idea that he was part of the Hollywood club.

Washington has even taken shots at Fake News Media bias.

During a red carpet interview he said, “If you don’t read the newspaper, you’re uninformed. If you do read it, you’re misinformed.”

Washington doesn’t broadcast his politics, but his belief in God and personal responsibility puts him at odds with the super “woke” set within the industry.

While on a press junket for the film Roman J. Israel, Esq., which deals with the criminal justice system, Washington said of the incarceration problem, “I think it’s more important to make headway in our own house. By the time the system comes into play, the damage is done. They’re not locking up seven-year-olds . . . It starts in the house. It starts in the home.”

Statements like that certainly won’t sit will with the Marxist cultural revolutionaries who want to burn down the entire society.

Will Denzel Washington be “canceled” if he continues to contradict the “woke” orthodoxy?