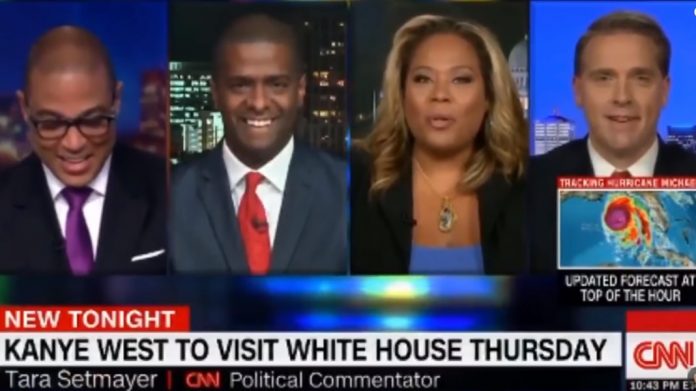 CNN is the heart of leftist propaganda in the media.

Segment after segment they use all their air time to shove their political agenda down viewers’ throats.

And what this CNN panel just said on live television is shocking.

Don Lemon is the host of the CNN show “CNN Tonight.”

And he recently hosted a group of panelists to discuss President Trump’s White House meeting with artist Kanye West.

The CNN panel disparaged Kanye as an example of “what happens when Negroes don’t read.”

CNN panels repeatedly slurred Rapper Kanye West over his support for President Donald Trump, and host Don Lemon did nothing but laugh when they did.

“Kanye West is what happens when Negroes don’t read. And we have this now and now Donald Trump is going to use it and pervert and he’s going to have someone who can stand with him and take pictures.”

“He’s an attention whore, like the president. He’s all of a sudden now the model spokesperson. He’s the token Negro of the Trump administration.”

This is the lowest of the low for CNN.

As if CNN couldn’t be any more provocative, they slam a black Trump supporter a “token negro.”

Democrats like these featured on CNN continue to launch racist attacks against anyone who dares to think for themselves.

Kanye West has been outspoken in his support for Donald Trump.

Most recently he appeared on “Saturday Night Live” with a “MAGA” (Make America Great Again) hat on.

This, of course, garnered a ton of hate without him even opening his mouth.

If Democrats continue to play this identity politics game, they won’t be able to compete with Trump in 2020.

A recent poll showed President Trump has gained support among blacks since his inauguration.