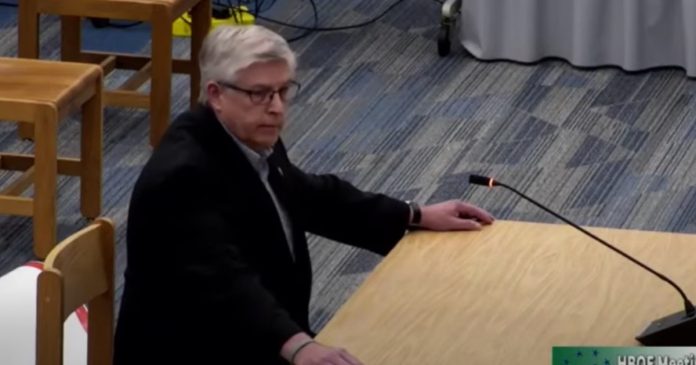 Government schools are brainwashing children in ways most would find unbelievable.

It is hard to comprehend some of the things so-called “teachers” are trying to bring into the classroom these days.

And this Ohio Mayor just took on the school board for tolerating a vile act being performed in the classroom.

More and more teachers are being caught trying to indoctrinate children with radical left-wing ideas.

And in some instances what these teachers are trying to slip into the curriculum is just downright criminal.

Case in point, a school in Ohio that has recently come under fire for writing prompts given to some high school students from a book called “642 Things to Write About.”

In the book students are told to “write a sex scene you wouldn’t show your mom” and then “rewrite the sex scene from above into one that you’d let your mom read.”

These are high school students being told to do this.

The teacher that used this book should be fired and barred from ever teaching again.

There is no reason any school student should ever be asked to write about something like this and that’s what Hudson Mayor Craig Shubert had to say during a school board meeting.

“It has come to my attention that your educators are distributing essentially what is child pornography in the classroom,” Hudson Mayor Craig Shubert told the Hudson Board of Education.

“I’ve spoken to a judge this evening. She’s already confirmed that. So I’m going to give you a simple choice: You either choose to resign from this board of education or you will be charged,” Shubert stated.

The Mayor’s ultimatum was met with cheers from the audience.

Parents in attendance called the prompts “disgusting” and a form of “grooming.”

In a prepared statement, Phil Herman, Hudson City Schools Superintendent, called the material “inappropriate and offensive writing prompts” and said the books were pulled from schools on Monday.

School boards across the country are facing increased scrutiny and it’s situations like this one that reveal just why so many people don’t trust government schools.

Unfortunately, many teachers never face the consequences for their actions and continue on trying to indoctrinate students.

It’s high time parents start taking a stand and removing their children from these left-wing machines.